Silver is a naturally occurring element that can be found in your jewelry, at the dinner table, in your digital camera, in your car and in your pocket. It is a monetary metal with roots that run parallel to gold. It is also an essential ingredient in many products that we take for granted in modern life. Silver is often misunderstood due to its multiple uses and critical nature.

Most metals are obtained through direct mining. Target areas are determined, geology is mapped and exploration begins. The entire excavation process is designed to retrieve one element be it gold, copper or iron ore. Due to historically low prices, silver is often only a mining byproduct. The element is considered a bonus for miners and until recently was rarely the target or direct exploration. This is changing however as critical demand and tight supply have joined forces driving prices to more realistic levels.

The current annual mined supply of silver is roughly 730 million ounces according to The Silver Institute. This immediately creates a deficit of 149 million ounces. Cash for silver scrap companies, recyclers and government stockpile sales were called on to make up the difference. One sector remains uncovered in this analysis, and it is silver held for investment purposes. In 2010, an estimated 178 million ounces of silver was acquired as an investment. When this number is added to traditional uses, demand begins to outstrip supply.

Why would someone hold silver as an investment? A silver coin is accepted as currency by any broker, dealer, trader or institution that is willing to accept a gold coin. In the United States, legal tender coinage contained silver until 1964. Most readers have been given a silver dollar at some point and likely considered it useless. The term silver dollar originates from the standard that one US dollar carried an accepted value of 1/20th an ounce of gold. There is approximately 16 times as much silver in the earth’s crust as there is gold. Gold is a traditionally favored store of wealth surviving in that role for nearly 6,000 years. Silver serves the same purpose but makes trade more effective due to its naturally practical denomination.

Inflation, uncontrolled currency printing, and monetary debasement affect silver in the same manner they do gold. Silver is a naturally occuring element that cannot be faked or easily acquired and provides monetary protection when the above mentioned threats to savings are concerned. Accepted history documents the Romans and other governmental attempts to debase currency by shaving small amounts of gold and silver from coins. This was a desperate attempt to steal wealth from trusting citizens and was needed to avoid the pain associated with misdirected and excessive spending. History continues to repeat itself and even today is driving the same behavior as current political conditions force citizens to seek protection for their accumulated wealth. 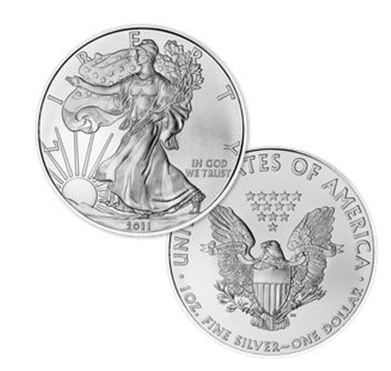 While the face value of this coin is still $1 the actual market value of the coin is currently $37.50. The ounce of silver used to produce the coin accounts for the increased price. In 2010, the US mint sold 34,662,500 silver eagles. In 2011, they estimate sales will eclipse 41,000,000 before the end of December. Demand for coins made of silver and issued by sovereign nations is rising along with other forms of the metal. As this trend persists, investors are optimistic that the price of silver will continue to rise as production is not able to keep pace with demand.

While the supply and demand fundamentals of the market for silver are very interesting, the price is not always affected by them. A spot price per ounce of silver is used to set terms of trade when metal changes hands. This price is derived from a quote available at the COMEX. The COMEX is a division of the New York Mercantile Exchange or NYMEX. The NYMEX was recently acquired by CME Group, the leading name in commodities trading.

Trading on the COMEX is conducted in the form of futures contracts. These contracts represent the right to purchase 5,000 troy ounces of silver at a predetermined date in the future. The buyer is only required to post an initial amount of cash, determined by the COMEX, in order to control the contract. Currently, a 5,000 ounce contract is worth $167,500 can be purchased using $24,975 in cash. This cash requirement is subject to change at any time and when raised, speculative behavior is effectively curbed in a matter of seconds. Holders of leveraged contracts are required to post additional cash to meet the new requirements. If they are unable to post additional funds they must sell their contract. Either choice creates a bearish situation for the price of silver in the short term.

Silver bulls have long suspected sinister activity surrounding the COMEX. At times, there have been allegations that the supply of silver held by the exchange is not sufficient to meet even a fraction of contract demand and therefore is not a true representation of the market. The exchange also holds the right to settle contracts in cash at its option. This further enrages silver bulls. At the core of their case is the fact that the entire annual production of silver has at times traded hands via paper on the exchange in a single trading session. The fact that this occurs with less than 2% of that traded silver held on hand for settlement does cause some concern. Silver bulls advocate physical holding of silver and assert their belief that the paper market will eventually be seen as a house of cards leaving contract owners with only paper.

The world markets are facing tremendous headwinds today. Developed nations are struggling to manage the massive debt burden that their societies have acquired over the past few decades. The world has embraced a fiat currency system and that very system is being challenged. For now, new debt seems to calm the deflationary forces that continue to haunt many nations. Savvy readers recognize that more of the same is not likely to solve this problem in the long term. While a stagnant economy might slow industrial demand for silver, investment demand quickly steps in to fill the void. When demand for a material is growing faster than the market is able to supply it, the price is forced materially higher. With multiple drivers of demand and limited availability of new supplies, silver is likely to remain in a bull market for some time.

By Edwin B. Tucker