The Percent Range (%R) technical indicator was developed by well-known futures author and trader Larry Williams. This system attempts to measure overbought and oversold market conditions. The %R always falls between a value of 100 and 0. There are two horizontal lines in the study that represent the 20% and 80% overbought and oversold levels. 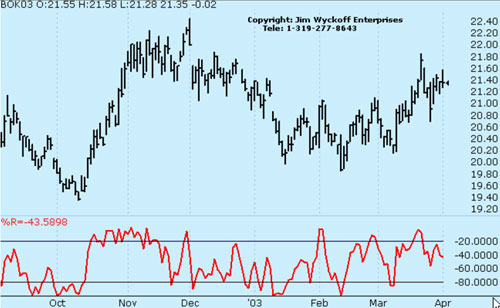 In his original work, Williams’ method focused on 10 trading days to determine a market’s trading range. Once the 10-day trading range was determined, he calculated where the current day’s closing price fell within that range.

The Williams %R indicator is designed to show the difference between the period high and today’s closing price with the trading range of the specified period. The indicator therefore shows the relative situation of the closing price within the observation period.

Williams %R values are reversed from other studies, especially if you use the Relative Strength Index (RSI) as a trading tool. The %R works best in trending markets. Likewise, it is not uncommon for divergence to occur between the %R and the market. It is just another hint of the market’s condition.

On specifying the length of the interval for the Williams %R study, some technicians prefer to use a value that corresponds to one-half of the normal cycle length. If you specify a small value for the length of the trading range, the study is quite volatile. Conversely, a large value smoothes the %R, and it generates fewer trading signals. Some computer trading programs use a default period of 14 bars.

Importantly, if an overbought/oversold indicator, such as Stochastics or Williams %R, shows an overbought level, the best action is to wait for the futures contract’s price to turn down before selling.

Selling just because the contract seems to be overbought (or buying just because it is oversold) may take a trader out of the particular market long before the price falls (or rises), because overbought/oversold indicators can remain in an overbought/oversold condition for a long time–even though the contract’s prices continue to rise or fall. Therefore, one may want to use another technical indicator in conjunction with the %R, such as the Moving Average Convergence Divergence (MACD).

Like most other “secondary” tools in my Trading Toolbox, I use the Williams %R indicator in conjunction with other technical indicators–and not as a “primary” trading tool or as a standalone trading system.

More information on the Williams %R indicator can be obtained from Williams’ book: “How I Made $1,000,000 Last Year by Trading Commodities