One of the things that you come to realize after studying Gann for even a short amount of time is that he never actually put down the tools he used to trade markets. So he would describe a general method of looking at the market, but would then use incorrect data or incorrect application of the tool in his examples. The idea was not to teach the method itself, but to show the general thought pattern required to rediscover the method. This is why so many “experts” can tell you everything you ever wanted to know about Gann, including what he had for lunch on any given day of the week, but yet still can’t trade their way out of a wet paper bag using his tools. It’s because they memorize the example, but not the reasoning behind the example, and end up continuously duplicating something that doesn’t work. 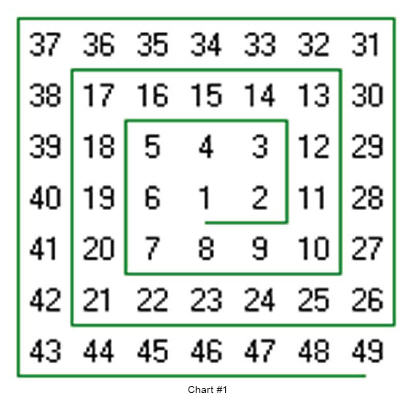 This simple pattern has been the inspiration for all kinds of research, and you can go out on the internet and find books, courses, seminars, and computer software that deals with nothing but how to use the Square of Nine to generate time and price targets on stock charts.

Th e Square of Nine and the hexagon chart (which is basically the same thing, but shaped as a hexagon) are prime examples of how Gann taught ideas but not techniques. So if Gann found a very powerful timing pattern based on a certain kind of visual numerology, do you really think he’s just going to publish the shape and say “here it is, have fun!” Of course not. What he’ll do instead is come up with a way of showing the basic approach, but leave enough out that the student has to sit down and work out the details on their own. The easiest way of doing that in this case is just do change the shape around. So, for example, he’ll go and publish a hexagon chart instead of what he’s really using. Th at keeps the technique safe, because only serious students will really bother to examine the idea thoroughly, and anyone just parroting the example will end up losing money because of it and will just move on. So he shares the “outer” technique in a roundabout way, and expects you to find the “inner” one on your own. Don’t forget that Gann was a Mason, so this sort of approach would have been very familiar to him.

In my own work, I’ve found all kinds of interesting market relationships based on Gann’s numbered squares. Not surprisingly, the best techniques all showed up when using shapes and approaches other than the ones described in the available literature. While there isn’t enough space in this article to cover everything, I would like to share a simple example to illustrate why it is important to “go beyond” Gann in order to really understand what he was up to. So rather than using the square of nine or hexagon charts, let’s do something a little different. 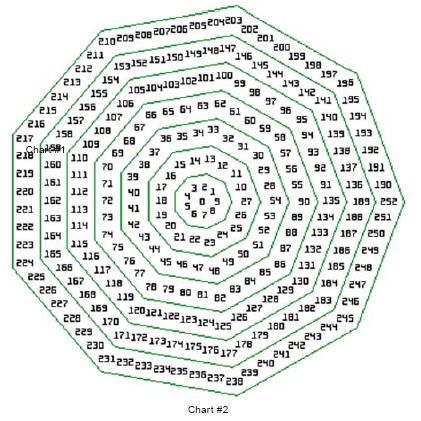 This chart is a nonagon (9-sided shape). Its construction is very simple. We start out with 0 at the center. Th e fi rst ring outside the center contains 9 numbers (1 through 9). The ring after that contains 18 numbers, and each progressive ring out from the center contains nine more numbers than the last one. This particular example runs all the way out to 252, which is far enough to be able to see the examples I’ll discuss, but there’s really no stopping point. This is built on exactly the same premise as the more widely known charts, but gives totally different results.

Before I go into one of the ways to use this pattern, I’d like to explain why I chose a 9-sided shape, and why it is an important one to look at. First, since we are dealing in numerological terms with this particular tool, the number 9 represents a complete cycle, and there is no digit larger than 9 in numerology, as 10 resolves back to 1 and the cycle starts over. So it’s a very powerful number governing cycles.

Second, 9 has some very interesting mathematical properties that mark it as a kind of magic number. For example, adding any number to 9 and resolving to single digits returns that same number. So:

There are actually quite a few mathematical tricks you can play like this, but it shows that there’s something special about the number 9. Gann considered it, along with 12, to be a master number, and he’s not just saying that to sound mysterious.

Thirdly, the number 9 shows up in all kinds of ways in markets, especially in conjunction with the number 5. That’s the reason why the Wave59 charting software is called Wave59, instead of Wave36, or some other possibility. Aft er studying markets, you get used to seeing that number appear in interesting ways, so it’s an obvious choice when looking at esoteric techniques such as numbered squares.

Moving back to our 9-sided number spiral, what we fi nd is that by arranging the numbers on the chart in this particular way, we highlight special relationships that we wouldn’t be able to see otherwise. Take a look at Chart #3. 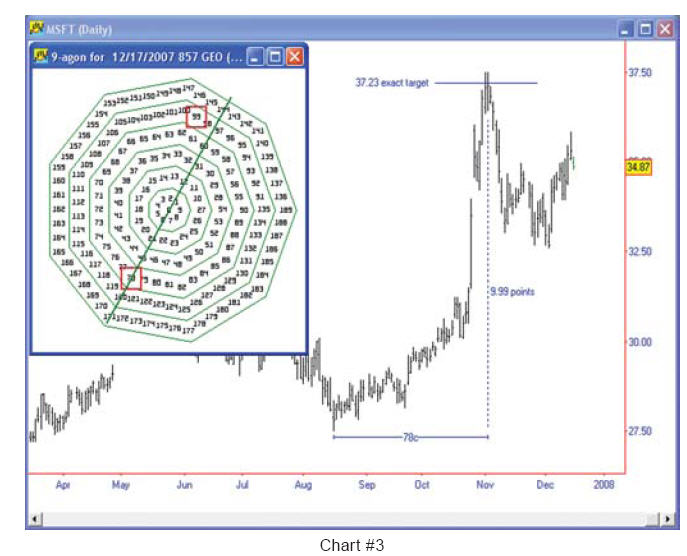 Th is is a chart of MSFT, showing the big upswing from August 16 to November 2. Th is swing lasted 78 calendar days, and ran up 9.99 points of price. If we find 78 on our nonagon, and look at it’s relationship to 99 (moving the decimal over one spot in 9.99 to get 99), you’ll see that they are almost exactly opposite each. So you can say that 78 calendar days and 9.9 points vibrate along the same line of force on this chart. When that happens to markets, turning points tend to form. 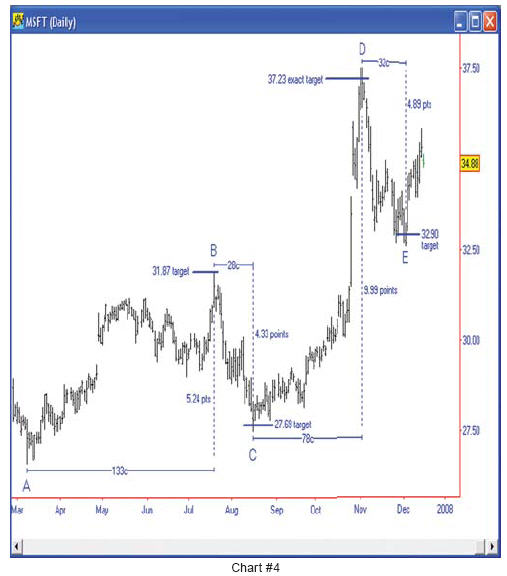 Here’s the rest of the chart. I’ve labeled highs and lows with the letters A through E, and have done the same thing as in the previous example, measuring each swing in calendar days and points, then correlating the two on the nonagon. Here are the results:

So you can see that this technique produces some very accurate price levels that the market bounces off when terminating a swing. It doesn’t project the date and time of a turning point, but gives you support and resistance levels that you can use each day, and is especially valuable as a fi lter to find the exact top or bottom of a particular move. You just need to know how many days have passed since the last important high or low, and all the various support/resistance levels can be found from that value. Here’s a chart for today, 13 days aft er the low on Dec 4:. See Chart # 5. 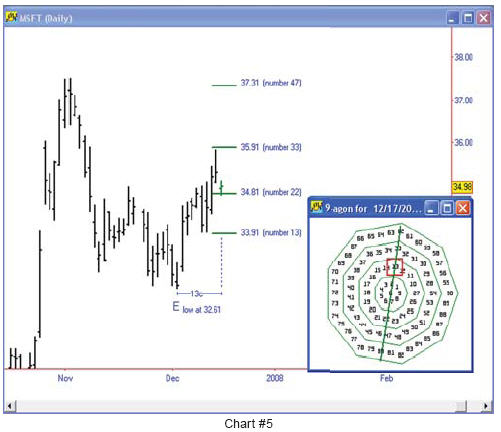 The low at E happened at a price of 32.61. Today is 13 days into the count, so we just move to our nonagon, look for 13, and then draw a line from that number through the center of the shape. All the other numbers along that line vibrate to 13, so they will be the associated price targets we can look at. The numbers 13, 22, 33, and 47 are closest to current price levels, so I just took them, moved the decimal over one place, and added to the low to get the four price targets shown on the chart. We’ve already bounced off of number 22 at a price of 34.81, so these levels can even be useful on an intraday chart.

In this article, I’ve shared the nonagon shape with you, a technique that to my knowledge has never been discussed before. I’m not sure why, as it is pretty much right out of Gann’s published material. It works well, and there is much more to it that could be discussed if space permitted. My main point here is to give a quick example of one of the ways I’ve profited by studying Gann and the other legendary traders. I’ve never met a trader who has done well parroting Gann as you see in the textbooks, but I’ve met quite a few who have taken core ideas of his and used them to rediscover some very important laws about markets. None of the legendary traders put their true techniques out in the open. What they did instead was to share quite a bit of the research that lead up to the discovery of what they really used, so if you are interested in understanding how they did what they did, you have to try and understand their train of thought and take it further than their examples demonstrate. Happy Trading!

Earik Beann is the developer of the Wave59 charting soft ware. Earik currently splits his time between guiding Wave59 Technologies, trading his own account, and researching the correlation between natural law and markets. He may be contacted at earik@ wave59.com. All the charts in this article, including the nonagon charts, were drawn using Wave59. For more information, visit www.wave59.com.