What if someone told you it was possible to capture the lion’s share of Dow gains by only being invested and at risk in the market for a little more than half the time?

Would it surprise you to learn that governments have developed an uncanny knack at kicking the economy into overdrive leading up to elections? If it wasn’t clear how self-focused our elected officials could be regarding their own political well-being before the debt ceiling debate, it should be crystal clear now. The debate was further confirmation that politicians will do whatever it takes, no matter what the cost, to get re-elected.

But luckily for them (if not for us), voters have short memories and the self-serving theatrics on Capital Hill will likely be forgotten by the time the next election rolls around. Such events are little more than expensive side-shows in the overall political landscape with roots dating back at least two centuries.

According to The Almanac Investor, evidence of the election cycle dates back to the administration of Andrew Jackson in 1833. Over the next 172 years, Dow Jones Industrial Average returns in the 24 months pre-election dwarfed those in the two post election years by a factor of more than three to one – 745.9% versus 227.6%. 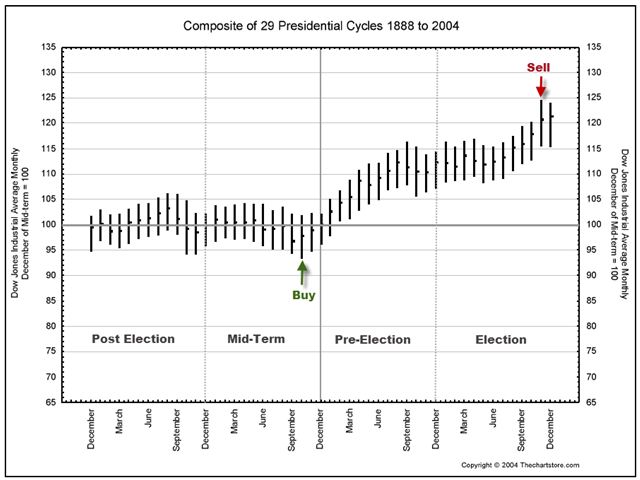 “The “making of presidents” is accompanied by an unsubtle manipulation of the economy. Incumbent administrations are duty-bound to retain the reins of power. Subsequently, the “piper must be paid,” producing what we have coined the “Post-Presidential Year Syndrome,” write Almanac Investor authors Jeff Hirsch and Taylor Brown.

Fast forward to today and the evidence is clear. Before the 2008 election, the Republicans introduced a host of stimulus programs such as the Troubled Asset Relief Program (TARP) and began to dramatically increase the money in circulation (Adjusted Monetary Base) in mid-2008 as the financial crisis unfolded before a federal election.

Over the years, election stimulus programs have had an incredible impact on stocks. For example in 43 post-election years between 1833 and 2001, the Dow generated a total 67.9% return compared to an impressive 457.6% return for the Dow for pre-election years according to the Almanac Investor. That works out to a ratio of almost seven to one! 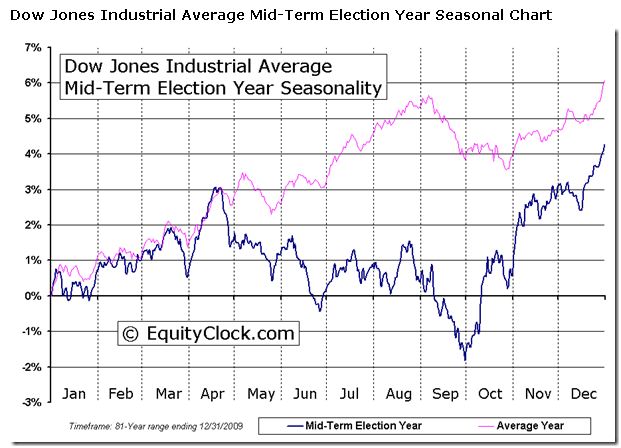 Figure 2 – Chart showing typical performance for the Dow during the mid-term year over the 81-year period from January 1928 to December 31, 2009. Chart courtesy of EquityClock.com 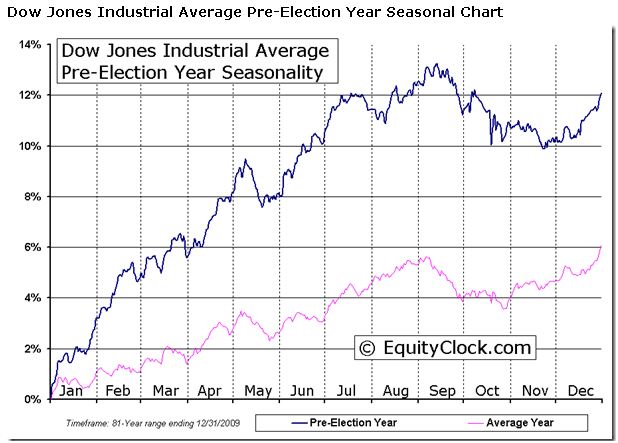 Figure 3 – Chart showing typical performance for the Dow during the pre-election year over the 81-year period to December 31, 2009. Chart courtesy of EquityClock.com 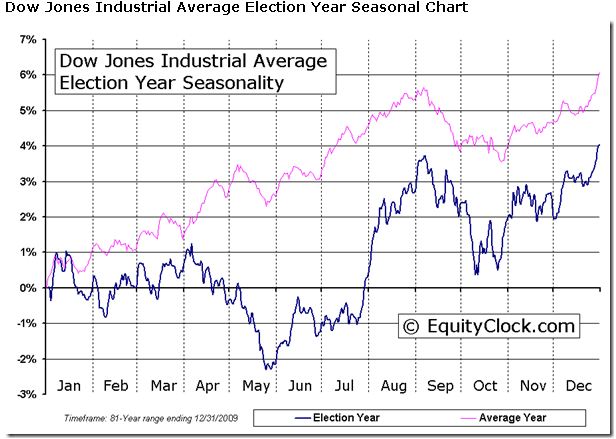 Figure 4 – Chart showing typical performance for the Dow during the election year over the 81-year period to December 31, 2009. Chart courtesy of EquityClock.com

With this evidence we designed a system to test how trading the election cycle would have performed over the last 113 years from 1898 through 2011.  Using the data from the composite 4-year election cycle in Figure 1, the system bought the mid-term year low at the end of September or beginning of October and sold at the end of November or early December each election year.

After initial testing, we made one final adjustment based on a composite of election year returns between 1928 and 2009 (Figure 4). Selling near the end of December (instead of November) of the election year provided slightly better results. The Mid-Term Election Seasonal Chart (Figure 2) confirmed the low at the end of September. 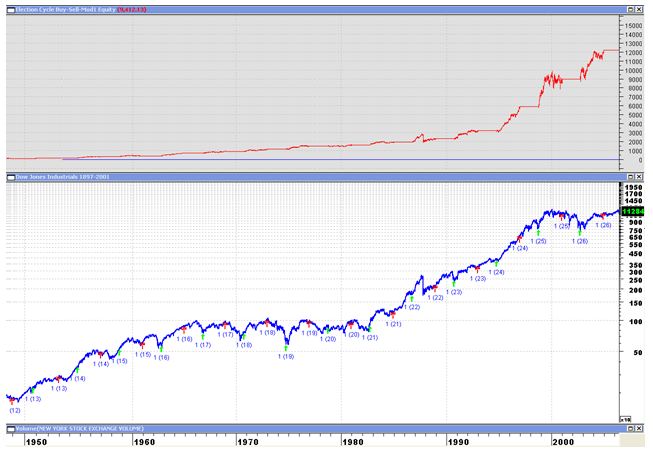 Figure 6 and Table 1 provide an overall summary of election cycle trading results. As Figure 6 shows, peak performance for the system occurred in 1980 at which time the election cycle trader would have captured 177% of the Dow buy & hold strategy. Election trade efficiency dropped after 1980, likely due to the fact that the 18-year bull market, born in 1982, generated gains in both pre and post election periods causing the election trader to miss out on some big rallies. 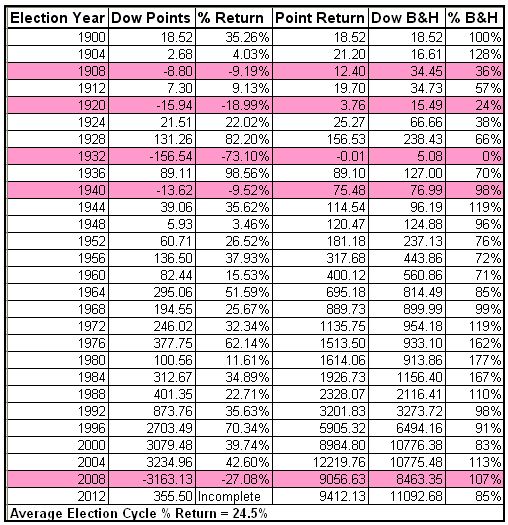 Table 1 – Summary of results from the election cycle trading system versus a Dow Buy & Hold strategy tested using Metastock. Losing trades are highlighted in magenta. The Dow Jones Industrial Average was trading at 18.52 at the beginning of the back-test period. The average return per election trade was 24.5% and over the period from 1898 through 2008 (the last full cycle), the system had 23 winning trades, 5 losing trades and captured 107% of Dow gains invested just 56.25% of the time. 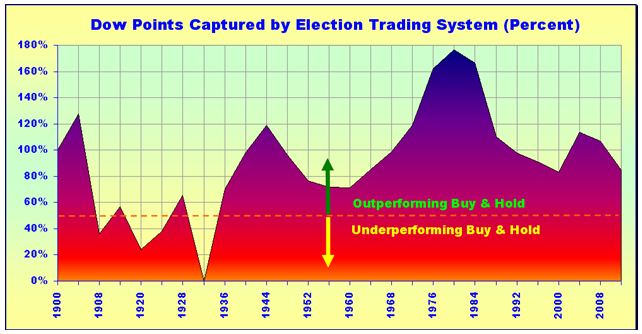 Figure 6 – Chart showing percent of Dow points captured by the election trading system from the beginning to the end of the back-test period.

Like many trading systems, the election cycle trading system has experienced ebbs and flows. It performed poorly in the wake of the 1929-30 crash and early stages of the Great Depression. But as we see from Table 1, the system quickly rebounded and had recaptured 70% of the buy & hold by 1936.

As Figure 6 shows, although invested a little more than half the time, the election cycle trader handily outperformed a buy & hold strategy for majority of the back-test period.

So will it continue to outperform? Since the financial crisis unfolded, governments have felt compelled to stimulate continually instead of just during the two years before each election. Tough love economic policies historically dealt out during post election years to curtail the excesses of the good years have been replaced by helicopter monetary policy in which stimulus has become an ever-present phenomenon. Under this economic environment, the election cycle trader may be challenged to so handily outperform the buy & hold, which itself has struggled with long-term returns mired near zero since 2000.

An examination of the Pre-election and Election Seasonal Charts (Figures 3 & 4) tells us that the Dow typically struggles until the end of November of the pre-election year but December can be a good time to be in the market. Election years tend to be choppy to negative until May but the period from May to September has returned an average 6% so could provide a nice lift if this pattern repeats itself in 2012.

We face some tough economic challenges and markets will continue to be volatile – not the situation that favors a buy & hold strategy. This is the type of market better suited to the shorter-term momentum trader who knows how to assess the big picture and use a strategy that fits that picture.

The election cycle trading system shows us that it pays to know what government is doing and play along. Understanding that politicians will do whatever they can to stay in office no matter what the cost and how monetary policy drives stock prices is essential to making money in this game.