With 2012 now behind us and new one underway, Dan Zanger, stock trader and host of Chartpattern.com, has had a chance to reflect and take stock of what the market holds for the coming year as he prepares for his upcoming annual stock trading seminar in April.

“Yes, the broader market registered gains but one big change since the 2007 financial crisis is the massive increase in volatility. Many are having a harder time making money. Unlike the 18 year bull market when all you had to do was show up to be profitable, today’s markets require the right strategy at the right time. Timing is more important than ever as is correctly recognizing and interpreting chart patterns,” he says.

One big 2012 volatility driver was the fiscal cliff melodrama on Capitol Hill but it was only the latest in a string of economic and political events that have pushed the uncertainty envelope. As markets have become choppier, traders and investors have grown increasingly more frustrated.

“Up trends where most money is made don’t last as long and corrections that follow are often more severe,” Zanger offers. “In late 2012 and into 2013, stocks were moving far slower than the previous four years. And 2013 began with some of the strangest stock behavior I’ve seen in years.”

In this new post financial crisis stock market, many strategies, systems and methods no longer make money. The buy and hold approach which worked great for the most part between 1982 and 2000 and again from 2002 to late 2007 has gotten a lot tougher to follow. A case in point – those who bought near the peaks in the S&P500 in either 2000 or 2007 are still underwater on their positions.

“To make money in today’s markets you need to be quick and then get out when the move shows signs of weakening. Now more than ever, I count on my experience gained through years of trading in every kind of market against the pros and market makers whose primary goal everyday is to take my money,” Zanger says.

Is it any wonder that more serious traders and investors now rely on daily stock newsletters and real-time chat rooms? Zanger takes a hands-on approach to helping his members navigate challenging markets.

When markets are open and active, Zanger is on hand in his Chartpattern.com member’s real-time chat rooms to share his favorite stocks, discuss breakout points, technical buy points, answer questions and discuss trading strategies. Participants also have the ability to team up with other members and network, share trading ideas, discuss stock picks and work on strategies.

“I spend more time doing my homework these days because the market has been much more like Jekyll and Hyde. For example, it’s been harder to find stock market leaders – those stocks that are first to jump higher when the correction is over and generally weather downturns better. And leadership is changing more often now. But they are the stocks you have to be in when the rally is on.”

After peaking in October 2012, stocks dropped before bottoming in mid-December and a new rally was on. Some of the market leaders Zanger focused on included Google (GOOG), Baidu.com (BIDU), Facebook (FB), Amazon (AMZN) Visa (V) and NetFlix (NFLX). Most were well off their 2012 highs but Zanger saw patterns emerging in these stocks that caused him to pay attention while the financial media continued to focus on the fiscal cliff.

What was Zanger seeing that made him pay attention? Chart patterns that he has learned to recognize midst all the noise.

In the first chart of Facebook, you can see the stock gap lower in July followed by a messy and untradeable bottoming process that took more than two months to complete. While many pundits discounted FB after its big drop post IPO, the way the stock was acting in November 2012 caused Zanger to pay attention. This pattern was a sign that the smart money was accumulating the stock, according to Zanger. When the stock powered up through the gap between $24 and $26, the game was on. 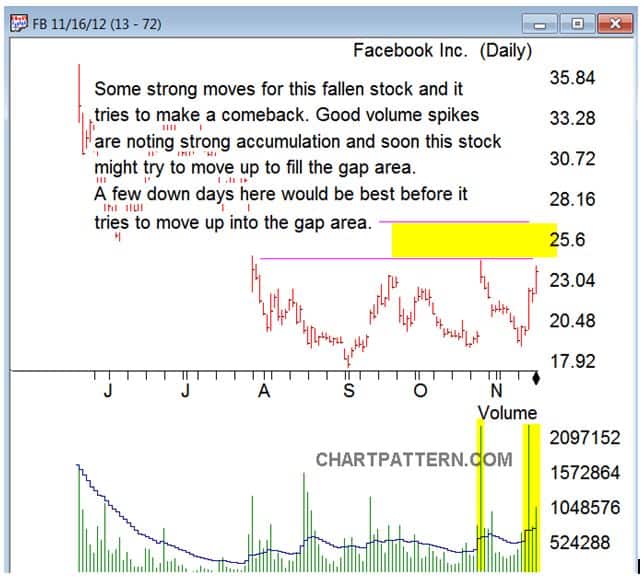 Figure 1 – Daily chart of Facebook from the November 16, 2012 issue of The Zanger Report with Zanger’s heads up to subscribers that the stock was setting up for a move higher. Chart courtesy Chartpattern.com

Next we take a look at one-time Chinese internet darling Baidu.com (BIDU) which peaked in 2011 and had struggled since. But in December BIDU posted a pattern that intrigued Zanger. After putting in a low in early December, the stock began to rally on lower volume, a sign that someone was quietly buying the stock. It’s the kind of action that often occurs at market bottoms he says. The break above its 50-day moving average at around $102 was further bullish confirmation and by year-end the stock was trading around $105 after posting a bullish V-shaped bottom. 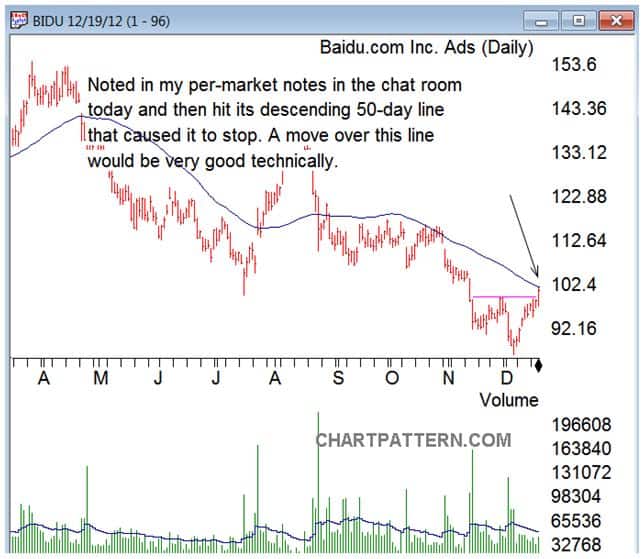 Figure 2 – Chart of Baidu.com from the December 19, 2012 Zanger Report. Note the volume spikes in the latter part of the year that shows buyers capitulating. Once this process is complete and retail investors have sold their positions, there is only one way for the stock to go and that is up.  Chart courtesy Chartpattern.com

NetFlix, another past internet stock darling that many had discounted as old news, was singled out by Zanger in December 2012 (Figure 3). It is a great example of how much more volatile the market has become.

Like Facebook, NFLX suffered a big gap down in 2012 on news that subscribers were abandoning the company in droves. But as the chart shows, that was the beginning of a longer-term bottoming process during which retail investors sold the stock and the smart money (institutional buyers) started accumulating it. Note the messy bottom between April and October followed by buying volume spikes on up-days – a clear indication of a stock transforming out of distribution into accumulation mode to the trained eye. 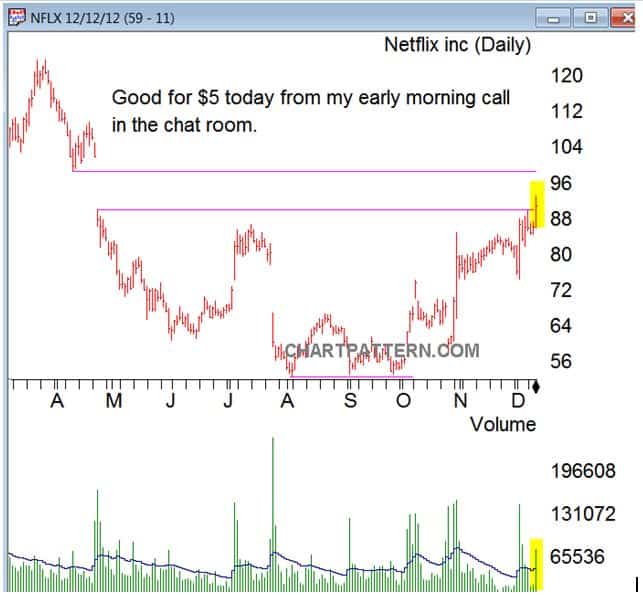 Figure 3 – NetFlix (NFLX) chart from the Zanger Report December 12, 2012 showing the gap down, triple bottom and then beginning of the break up through the gap. By mid-January 2013 the stock was trading above $100 in a strong uptrend. Chart courtesy Chartpattern.com

The year 2012 was a great example of a pre-election year – years that typically see the biggest stock market gains of the four year presidential cycle. But it was also a year punctuated by big gains followed by double-digit corrections that severely punished those who overstayed their welcome.

“Markets typically rally about a third of the time. The rest of the time is taken up by frustrating trading ranges and corrections. My goal over my career has been to learn how to recognize when stocks are

rallying which is when most of the money is made and knowing when to switch to playing defense either by going to cash or switching to dividend paying stocks,” Zanger says.

“During rallies, the trick is to identify the stocks that are leading the rally and buy them when the probability for gains is highest. But more important from a time perspective, since stocks aren’t in rally mode much of the time, is to know how to recognize stocks that are best able to buck the correction and pay you for waiting. For example, the best performing defensive stocks in 2012 were companies like Apollo Residential Mortgage (AMTG), American Capital Agency Corp (AGNC), Two Harbors Investment Corp (TWO) and Armour Residential REIT (ARR). But the goal isn’t to buy and forget – it’s still important to have rules and only own them while they are going up or consolidating.”

Become Your Own Guide

Making money in any market can be a challenge but it is even more so today. Like finding your way through the jungle, you will quickly get lost without a detailed map, the right tools and a specific goal. Here are Zanger’s five keys to trading success in this more volatile market and tools that helped him to turn $11,000 into $18 million.

1) Preparation. It would be foolhardy to set off on any trip through the wilderness without preparing. Trading is no different. You need to know how to read a stock chart, know where to buy, where to sell and where to place your stop losses. Before every trading day, it’s important to do your homework, identify which stocks are getting ready to move and know what your technical buy areas are on each stock. For his subscribers, the real-time Chartpattern.com chat-rooms helps traders, especially those new to the business, get ready for the trading day. Zanger walks his participants through the stocks he is watching, technical buy areas and buy points and points out the money making chart patterns he’s seeing.

2) Chart pattern identification. Zanger spent years learning how to recognize chart patterns in an instant, and to recognize when a move is getting tired. Some of Zanger’s money makers include Flags and Pennants, Cup and Handles and Head and Shoulders patterns. They are easy to see when someone points them out to you – the trick is to learn to spot them when they are forming during the trading day. Dan lists a number of essential books that every serious trader and active investor should own at chartpattern.com

3) Isolate the leaders. Every money-making rally begins with the market leaders outperforming the rest of the market to lead prices higher. This is why it is crucial to know what these leaders are quickly. During the 2003 -2007 rally, many of the leaders were technology stocks like Taser (TASR), Research in Motion (RIMM), E-Bay (EBAY), Sina (SINA) and Apple (AAPL).  In the rally that began in March 2009, technology stocks like AAPL, BIDU and GOOG led the market higher but so did some financial names like Goldman Sach (GS), MasterCard (MA) and Visa (V). Owning these stocks at the right time made Zanger millions. On one stock alone, Google, Zanger earned an 8 figure paycheck in 2005!

4) Focus, focus, focus. Anyone who has watched Zanger trade knows that there is nothing that can distract him when he’s at work. He has developed laser-like focus and the ability to stay glued for hours at a time, constantly scanning his 8 computer monitors for trades. This kind of discipline takes time and commitment to develop. There is nothing worse than going for lunch, taking a phone call or answering the door while you’re in a trade (or waiting for one to setup) only to return and realize that you’ve just lost a bundle.

5) Have a map.  Zanger has developed a list he calls Dan’s 10 Golden Trading Rules. It is his map to trading success and includes rules on every aspect of the trade including when to buy, when not to trade, when to exit and where to take profits. He developed it after years of trading and learning what worked and what didn’t. Every trader needs to learn how to build their own personal rule book based on their personalities and risk tolerance levels but Dan’s is a great template.

Avoid Being Eaten by the Natives

“I think the hardest lesson for most is developing the discipline to stay out of the market when conditions aren’t ideal. Years ago, I’d see a powerful move, jump in with some big trades, only to see the move evaporate so that by the time I was able to exit, the trade was a loser,” Zanger reminisces. “There is nothing like a series of losses to teach what not to do.  The key is having the patience to wait for the right time, the persistence to stick with it so that you are at your trading desk when the move develops and the passion to play the game long enough to be successful.”