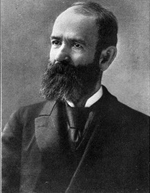 Jay Gould (1836-1892) was born and raised on a farm near Roxbury, New York. He attended Hobart academy but left school at 16, to continue studing privately. By the age of twenty-one he had prepared several county maps, written a local history, and saved five thousand dollars. He worked with his father in the hardware business for a brief time, then in the lumber and tanning business in western New York and also in banking in Stroudsburg, Pennsylvania. Gould operated a tannery but gave it up to join a Wall Street brokerage house. Following the panic of 1857 he had made profitable investments in several short railroads.

In 1867 Daniel Drew, director of the Erie Railroad, added Gould and James Fisk to the Erie board of directors. Cornelius Vanderbilt, of the New York Central, attempted to buy control of the Erie Railroad. Vanderbilt obtained an arrest warrant for the three, Gould Fisk and Drew moved company headquarters to Jersey City, and Gould ensured that the New York legislature authorize the stock issue of thousands of shares of new stock. They ultimately succeeded in keeping control of the Erie Railroad, and Gould and his partners looted the railroad’s treasury by stock manipulation.

In the fall of 1869 Gould and Fisk conspired with the brother-in-law of President Ulysses S. Grant to corner the gold market, which caused the panic of “Black Friday,” September 24, 1869. Having left his Erie Railroad post in 1872, he gained control of several Western railroads. He also owned the New York World (1879–83), most of New York City’s elevated railroads, and several large telegraph companies, including Western Union. In the twenty years after 1872 he was a director of seventeen major lines and the president of five. During the 1880s Gould was master of about half the mileage southwest of St. Louis and Kansas City and tried unsuccessfully to expand his western holdings into a transcontinental railway line to the Atlantic Coast. Gould suffered from tuberculosis and died of that disease at the age of fifty-seven. He left $77 million to his six children.