There are times when the market is in such a strong trend that even Stevie Wonder could see which direction to trade. Currently, however, the markets area is acting like a conundrum wrapped in a riddle. There are just as many reasons to be bullish as there are to be bearish.

And even the most sophomoric of market technicians is aware of the “magic” Standard and Poor’s 500 major technical number resting at 1,200. The problem is that, since this time last month, the market has crossed over and under SPX 1,200 a dozen times, confusing both bulls and bears alike.

QUESTION: So what do you trade when you are confused about what the future holds?
ANSWER: The Broken-Wing Butterfly (a.k.a. BWB) is an ideal strategy for such situations.

The best way to learn the BWB strategy is to begin with the traditional butterfly spread and go from there.

Most options traders are intimately familiar with the butterfly spread as a low risk strategy that has a high reward potential – if they choose the correct strikes. The construction of the butterfly spread is simple enough. The spread is defined as the simultaneous purchase of one vertical spread (call or put) and the sale of another further out-of-the-money (OTM) vertical spread where both spreads share a common center strike price.

An example would be the purchase of a bearish 1210 – 1200 (near-the-money) put spread. To reduce the initial investment of this $10 wide spread, a trader could sell the 1200 – 1190 (further OTM) spread. Since the 1200 strike option is used twice, you will notice that the resulting butterfly spread has a contract size of one contract by two contracts by one contract.

On Friday, September 16, the market is above the 1,200 SPX line, and we will assume that the markets are going to be heading back to that “magic” 1,200 number. We would like to invest in a butterfly where the maximum profit is realized when the S&P 500 gets down to $1,200. Furthermore, because the markets have been so volatile of late, we will stick with the ‘weekly’ options that expire the following Friday (September 23), though we could have chosen any expiration cycle we wanted.

Using the current option prices (Friday’s closing marks) at the close of trading, we quickly put on the 1210-1200-1190 butterfly spread. Recall that the butterfly spread can be thought of as the purchase of one spread and the sale of a further out-of-the-money spread. 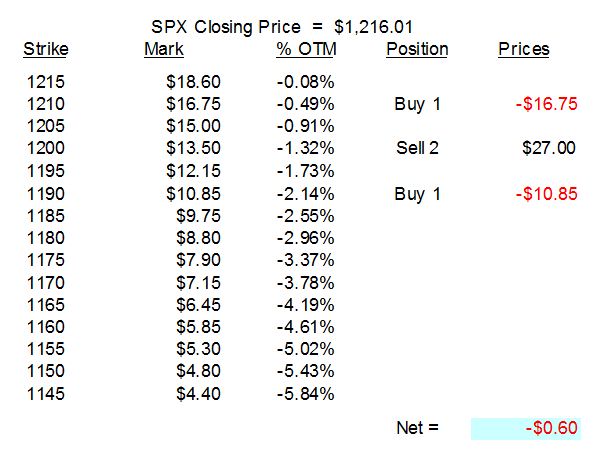 The below risk graph shows a very optimistic picture which could have people running out to open brokerage accounts tomorrow. Hold off for one moment though. 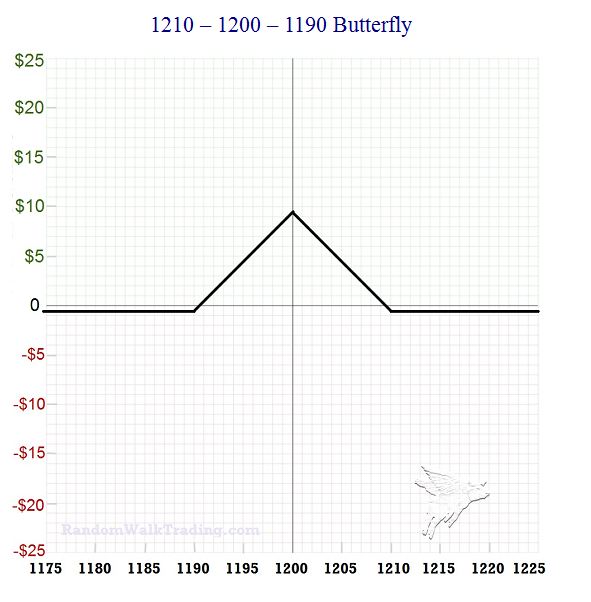 There are two inherent problems with the traditional butterfly:

1. The stock has to close within the range of profitability on expiration.
2. The market could go up instead of down (as we are postured).

How do we fix this?

There is a possible solution to the inherent problem of the butterfly spread – the BWB.

By moving the tail strike (1190 in this example) down one more strike we will be paying less for this spread, thus eradicating the worries that the market could possibly go higher when we are anticipating it going down. We know that the traditional butterfly spread is comprised of a long and short vertical spread of equal sizes. In the above example, we bought a $10 wide spread (1210 – 1200) and sold a $10 spread (1200 – 1190). 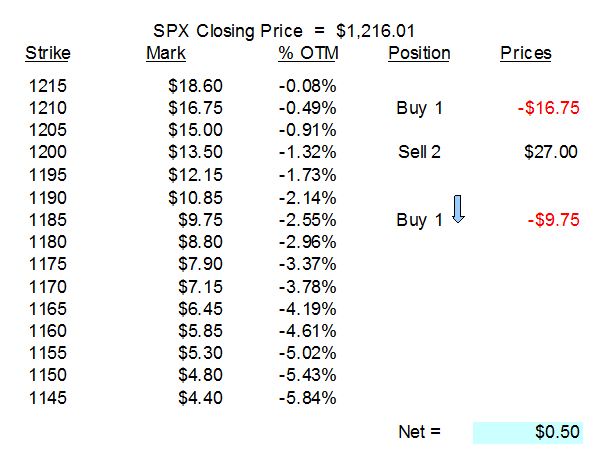 The movement of the ‘tail’ strike (1190) down to 1185 will have an adverse effect on the risk graph. As a matter of fact, comparing the traditional butterfly with the BWB will lead to an impulsive decision to go with the former rather than the later at first glance. 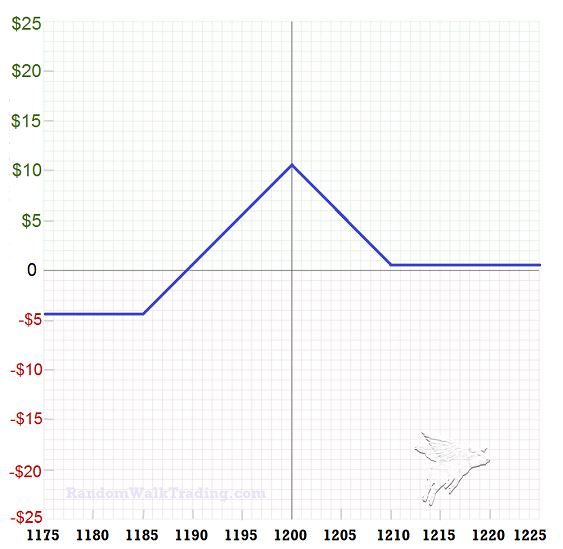 The profit and loss graph above shows that the downside break-even point (the place where the BWB will stop making money and will start to lose money) is at $1,189.50. Below the break-even point, the position starts to lose money.  Many traders will be concerned about the possibility of losing up to $4.50, and thus prefer the traditional butterfly.

When deciding between the traditional butterfly and the BWB, you must consider how much safer the BWB is over the long run. The BWB is safer for three reasons:

Instead of paying a $0.60 debit, a loss that will occur often with the traditional butterfly, we will be receiving a credit of $0.50. This swing of $1.10 goes a long way to offsetting the $4.50 risk over many expiration cycles.

Most importantly, the long $10 spread that is close to ATM brilliantly protects the short $15 spread that is OTM. Recall that the “scary” BWB chart shows how the spread looks at the moment of expiration. Prior to expiration, the position is very well protected, and an example will prove just that.

Suppose that the market in the S&P fell $30 the moment after you placed the BWB trade. This would bring the SPX down to $1,186.01 ($1,216.01 – $30 = $1,186.01).  You are now concerned about this area because it is getting close to falling below your break-even. There is a simple fix for determining what your spread would look like should the market actually fall that far and fast.It may sound confusing at first, but it is simple. Stick with us.

The math should calm your nerves if you were concerned about the potential $4.50 loss (at expiration). The long $10 spread that is ATM is a very good hedge against the risk of the short $15 spread that is further OTM. The next graph illustrates what the position looks like PRIOR to expiration. The curve represents what the spread will look like the moment the trade is put on. 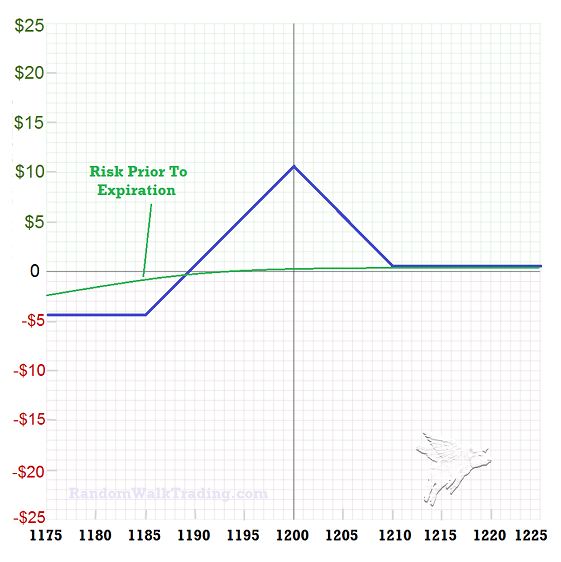 Since we introduced the broken-wing butterfly to the world, the spread has caught on with a ferocious fervor. Now, you can see why. Novice and intermediate traders who have been taught that vertical spreads are the way to make money in the markets (and who usually become disenchanted with them) are embracing this strategy en masse. Since this can be done with calls to the upside and puts on the downside (either separately or combined to form a BWB strangle), you can see why this strategy has been termed “One Strategy For All Markets.”

RandomWalkTrading.com is an education company that has become synonymous with being “The Bible of Option Trading.”