Well known within the trading community, Richard Dennis and William Eckhardt have forever changed the landscape of commodity trading. Not only amassing fortunes themselves, Dennis and Eckhardt created a whole school of trading which, merely off a bet, made 23 lucky students very rich. Today their impact can be felt through the establishment of the very popular Turtle Trader program.

Richard Dennis started his career trading futures at the age of 17 in Chicago. Since Dennis was too young to be trader (traders had to be at least 21 to have a seat), Dennis hired his dad as his trader in the pit and he was his own runner.

Dennis went to DePaul University for his undergraduate work where he earned a degree in philosophy. Dennis did earn a scholarship from Tulane University for graduate work, but decided he would rather trade. Dennis borrowed money from his family to buy his seat and fund his account. After buying his seat, Dennis was left with $400 to start his trading career. Within three years, Dennis capital was well over $100,000 and he was a millionaire a year after that. In 1974, Dennis made over $500,000 trading soybeans. Dennis had become a millionaire four years before his 30th birthday. 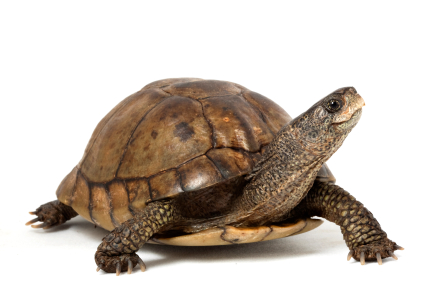 In the early 1970s, the grain markets surged due inflation here in the United States coupled with repeated crop failures globally. This set the stage for a dramatic bullish trending market that kept making higher highs and higher lows. Dennis was able to profit by having a longer term trend following method which stayed in the market much longer than most floor traders. Dennis rode out short fluctuations, counting on the trend being reestablished eventually. Dennis not only left his positions work for him, he would also pyramid positions whereby he would add to his winning positions with more contracts. Eventually, Dennis had made enough money to buy a full membership form the CBOT by the late 1970s.

As tales of his success grew, Dennis soon thereafter managed money for other investors during the 1980s. Initially Dennis was able to translate his successful investing into gains for his clients, but eventually he quit after taking heavy losses in the late 80s. There are reports that Dennis lost a total of $50 million in client assets in 1987-1988 and lost nearly a fifth of that on Black Monday alone. Dennis has since managed funds for others briefly, but has since turned his endeavors to other projects like domestic Drug policy and sits on the board of the Reason Foundation.

William Eckhardt was friends with Richard Dennis back in high school.  Eckhardt studied math in school and was on track to get a doctorate in mathematical logic from the University of Chicago in 1974. As the story goes he was close to finishing his doctorate then the school underwent a change of advisors. The new advisor wanted Eckhardt to scrap his thesis (which was about 75% done) and change to something else. Not wanting to stay in school for another year or two, Eckhardt decided to join Dennis in the pits, never to return to school (Eckhardt did eventually get a degree for the University of Chicago).

Dennis and Eckhardt were partners in trading for a couple years before a debate between the two sparked one of the bigger trading ‘schools’ ever. With Dennis being a philosophy major and Eckhardt being a mathematician, they differed on whether or not anyone could be taught how to be a successful trader. Eckhardt believed that it took a certain amount of mathematical know how to correctly predict market movements while Dennis believed if people had a set of rules by which to trade, they would be successful.  And so began ‘the bet’ that would eventually lead to the Turtle Traders.

In 1983 and 1984, Dennis and Eckhardt put out an ad looking for people for them to train for two classes. They were looking for people with or without experience trading so they could get a better cross section of the general public. They originally ended up training 21 men and 2 women, some in December 1983 and the rest in December 1984. After only a two week class teaching the students trend following trading, Dennis then gave his students a million dollars of his own money to manage. When the experiment finally ended five years later, his students had made an aggregate profit of $175 million.

Dennis came up with the name Turtle Traders after a trip to Singapore. While in Singapore, Dennis visited a turtle farm where they bread turtles in huge vats. This inspired Dennis to tell Eckhardt that “we are going to grow traders just like they grow turtles in Singapore. “ 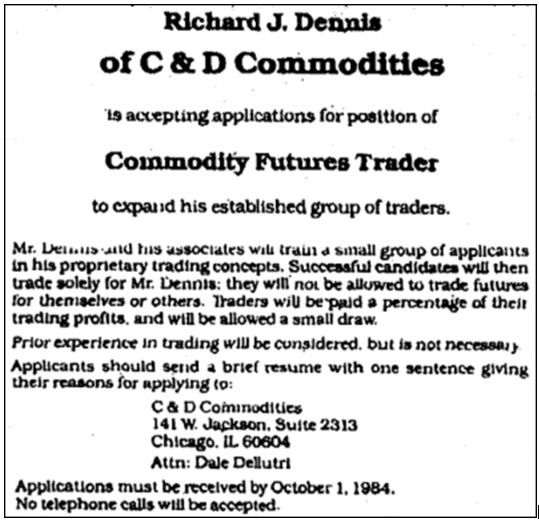 Dennis was right; it was possible to train people to be profitable traders. Dennis and Eckhardt taught many novices how to make millions and they soon closed their school. One of their students, Jerry Parker, who later on worked for Chesapeake Capital, managed to make over $30 million in one year, ten years after taking the class. Their legend grew via word of mouth marketing as their students went on to make well over $100 million using the Turtle Trading System. Even today people buy Turtle Trading programs, of which they are many to chose.

What is the Turtle Trading System?

As stated earlier, the Turtle Trading philosophy is built around the notion of following the trend. Far too complex to fully explain here, the basis of their trading is to follow the trend, whether it’s up or down. The turtles also look to play break outs, i.e. buying on new highs or shorting on new lows. By playing break-outs, one is therefore also playing false break-outs. The basic tenants of Turtle Trading are still fundamentally sound today, as seen in the recent run up of most commodities, from coffee to corn to silver to crude oil.

Since the closed their ‘school’, Dennis and Eckhardt have remained active in futures markets both actively and passively. Both went on to managed money for investors and have become active philanthropically. Their teachings have been read by millions of investors (and every trader) and spun off schools of their own.

Dennis did go back and manage money for investors as recently as 2005 with Dennis Trading Group. Dennis has updated his trading method with the advent of computers and has been able to recoup some of the losses he took in the 80s. Dennis frequently writes op-ed pieces for the New York Times, Wall Street Journal and Chicago Tribune. Dennis has worked with the CATO Institute, Reason Foundation and is active with the Drug Policy Alliance.

Eckhardt went on to found the Eckhardt Trading Company in 1991 which manages over $1 billion in institutional funds in the commodities markets. Eckhardt recently gave the University of Chicago $20 million for scientific programs. Eckhardt still writes pieces for various philosophy magazines.

Students of Dennis and Eckhardt like Russell Sands and Michael Covel have gone on to start Turtle Trading Schools of their own. Their programs have been seen by millions of people worldwide. Covel recently produced Broke: The New American Dream which goes over the market crash of 2007 – 2009.