New Year’s resolutions are often made and broken within the first days of January. The most popular resolutions, things like losing weight or quitting smoking, require will power and action. Traders can succeed with a simple resolution to act less often in the year ahead and to buy or sell only when their trading strategy says to. That means following your trading plan instead of reacting to the news that inundates traders every day.

Successful traders have the least emotion. This was reported to be true in a study that found trading professionals score well on tests for psychopathic disorders. In trying to verify this study, I was unable to find an original copy of the study in English but found a link that cites a web site from Switzerland as the original source. Without having read the study, I can’t confirm that traders tend to have lower emotional responses than nontraders, but the idea makes sense. Emotions can only lead to quick decisions and good trading usually requires the ability to endure short-term losses in the pursuit of long-term gains.

Whether traders are psychopaths or not, the most successful traders have the ability to ignore the emotions of the market and make profitable trades in times of turmoil. They follow their rules and not their emotions. In all honesty, this is a skill many new traders lack. Beginning traders will often react to what they think the market is doing because that’s what they think trading is. Many start trading with the idea that they will be engaging in a rapid fire series of trades, buying as the market bottoms and selling when it tops. After repeating this pattern a number of times, they will then retire to a life of leisure using the wealth they acquired in their brief trading careers. Since most small traders fail to become large traders, we can assume this trading plan rarely works.

What does work in the markets is a disciplined approach. For 2012, traders seeking success should resolve to be disciplined and less reactive.

Discipline requires a trading plan, knowing beforehand what will cause you to buy or sell. These decisions can, and should, be made in advance. Discretionary traders occasionally find success in the markets, however they are most often full-time market professionals who can study the price action and get a feel for the markets. Part-time traders will rarely be able to do this. For the beginning trader who has limited time and capital to devote to the markets, a rules-based trading system offers the most chance for success. That type of strategy eliminates emotion and prevents buying and selling based on fear or greed.

Charts show the emotion that traders feel. Large weekly drops in the Dow Jones Industrial Average (shown below) are a common occurrence. These drops tend to be followed by consolidations and are in hindsight a time to buy. We know that prices drop when there are more sellers than buyers, so the chart tells us that many are selling on these drops. 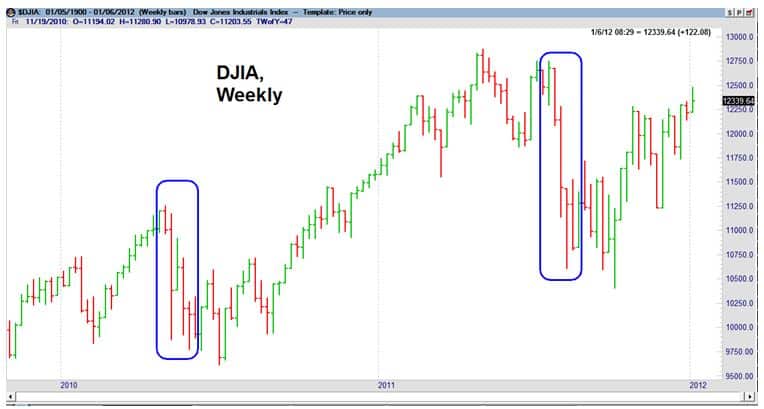 Selling into a decline is the wrong thing for a buy-and-hold investor to do. Recoveries come after these drops and if the investor truly has a long-term investment horizon, they should be buying these declines. Unfortunately, emotion impact investment decisions and long-term investors tend to underperform the market.

A research firm named DALBAR studies the impact that investor decisions have on their returns. Their data shows that investor’s return in all equity funds over the 20 years ending in 2009 was 3.17% while the S&P 500 returned 8.20% during the same period. This would indicate that market timing cost investors about 5% a year over the 20 year period.

Long-term investors should be matching the market and most fail to meet that objective. Short-term traders are trying to beat the market, an even more difficult task. Looking back to that long-term chart of the Dow, many traders were no doubt trying to call a bottom after the big range weeks. They were early and with leveraged investments being early can lead to large losses.

For those with the skills to master discretionary trading, the paper account will be a confirmation that you are ready to put real money to work in the markets. Others can use a system to trade and by following the rules with discipline, profits are possible. Let’s see how a few simple strategies would have done on the S&P 500 last year, a time when the market ended right where it began.

Stocks were characterized by volatility in 2011. Although the S&P 500 was unchanged at the end of the year, it started with a gain of almost 10%, a decline of nearly 20%, another gain totaling more than 20% followed that and the year ended with two smaller reversals. This was not a good environment for trend followers.

One of the simplest and most effective trading strategies is the 4-week rule. Traders go long when prices reach a new 4-week high and short a new 4-week low. This strategy would have lost money trading the S&P 500 last year. MACD is also generally a useful trading strategy and it would have lost money in the S&P 500 in 2011. Moving average crossover also failed last year, as expected in a market that is trendless.

In a market that is not trending, oscillators work well. RSI was profitable when applied to the S&P last year. There are a number of ways to apply this indicator to trading. The simplest is to buy when RSI moves above 30 and sell when it falls below 70. This approach has the problem of missing a number of market turns as the indicator fails to reach those levels, which are the defaults in almost all software packages.

Any indicator can be normalized with the stochastic formula. This allows the trader to see when the indicator has reached a high or low value based on its recent range. There are more signals with this approach and this idea tends to be more profitable than simply applying the raw indicator to trading. Defaults for stochastics are generally 20 for oversold and 80 for overbought and those values work well with this technique.

The year’s performance demonstrates the importance of diversification. Losses from trend following strategies would have been offset from strategies designed to do well in trading ranges. In next week’s article, I will more fully develop the idea of trading a stochastic of an indicator.

To get ready for 2012, traders should make a resolution to simply follow their rules. Some trading psychology books recommend defining success as following your rules on a daily basis. This may seem unappealing to traders who think that success is determined by profits. However, if your rules are well designed and have been successful in the past, the best chance of long-term success will come from following them precisely. Following your rules every day should ultimately lead to profits.