For those busy watching equities, health care debates or the latest unemployment data, you may not have noticed that crude oil has been in an aggressive bull market since February.

While the debate rages on as to if there will be a “double dip” in the economy or a second crash in the stock market, the energy markets have been quietly pricing in a global recovery. And perhaps it should be. Bulls have some solid data to back up their case.

The Market is Always Right

While many doubted estimates that the US economy would grow by 3% in 2010, recent data is making this appear more believable. US Employers added 162,000 jobs in March. The Activity index for the nation’s service industries rose to 55.4% in March from 53% in February. The National Association of Realtors says pending home sales rose 8.2% in February from January.

China, the worlds second largest consumer of crude behind the US, has an economy that is expected to grow by 9.5% in 2010, according to World Bank. 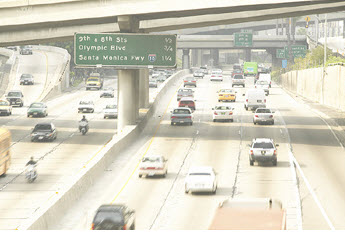 Summer “driving season” often brings a surge in retail gasoline demand. But what happens on the wholesale level?

The world’s first and second largest consumers of crude oil growing by 3% and 9.5% respectively should not be a bearish development for crude prices. The EIA pegs global oil demand bouncing back to about 83 million barrels per day in 2010, close to 2008 levels.

In addition to a favorable macro-economic climate for oil, we also find ourselves on the eve of “driving season” in the US when millions of consumers take to the highways as warm summer weather arrives and schools across the US recess for summer break. (See “Prelude to Driving Season Opportunity for Put Sellers – 3/1/10” at www.OptionSellers.com). The Springtime month’s leading up to summer have often been associated with higher oil and gas prices as distributors stock up on inventories in order to meet the expected demand.(Past performance not indicative of future results.)

A strong bull case, perhaps. One must remember, however, that these are not new developments. Oil prices have rallied $16 per barrel since February – nearly a 23% gain. How big of a recovery exactly, are we expecting?

The Irony of Seasonal Demand

There is a certain irony of seasonal tendencies in energies. It is likely that a good portion of the price gains over the last two months can be attributed to seasonal inventory demand by gasoline distributors. While distributors spend the springtime months accumulating supply, they will stop accumulating once they hit maximum storage capacity. This often happens in May or early June. Therefore, demand at the wholesale level begins to wane.

As the NYMEX futures contracts measure wholesale prices, it is not uncommon to see futures prices begin to recede, right at the exact time that demand at the retail level begins to rise.

In addition to seasonal tendencies, oil has a series of other bearish weights that combined, could begin to slow or even reverse, the current bullish course.

A. The “Recovery Story” is becoming old news. Oil was pricing in 2010 US growth before the general investment community began buying into the story. Now, estimates for Chinese and US growth are old news. The job of economic reports over the next several months will be to confirm that these views are on track. The oil markets seem to have already done a good job of factoring this expected growth into price. Thus, the potential for surprises would seem to be on the downside.

B. Supplies Remain Burdensome: At 356 million barrels as of the latest EIA estimate, US crude stocks are near historical highs for this time of year and are now 7.1% higher than the five year average. Heating Oil Stocks have eclipsed their 15 year average high – at a time of year when demand plunges and supply tends to build. 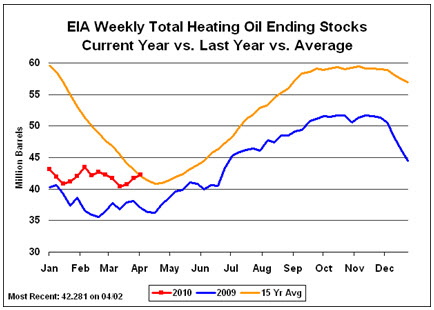 C. OPEC Non-Compliance: OPEC is running at 54% compliance to it’s own self set production quotas. This is a paltry figure even by OPEC standards. OPEC provides 40% of the world’s oil. Key members such as Saudi Arabia, Qatar and Kuwait are said to be operating at maximum capacity. As the world’s largest oil conglomerate, if you thought prices were going up later, would you be pumping oil as fast as you could right now?

While impressive in it’s velocity, it is our opinion that the rally in crude oil and products could reach a crescendo sometime within the next 30 days. While macro factors such as economic reports, a weaker dollar, or the standard geopolitical tensions could act as bullish counterweights, the cyclical pullback in wholesale demand will force the market to refocus on oversupply issues.

While petroleum markets tend move in the same general direction, we believe heating oil will offer the better opportunity for call sellers as slack demand issues should make it the “weak sister” of the complex.

We would view any additional rallies over the next 30-45 days as opportunities for selling call premium at strikes 40-50% above the current price of heating oil. The objective is to take a neutral to bearish position while still giving the market plenty of room to fluctuate. (Option Selling is one of the few, if only strategies where you can be wrong on market direction and still potentially have a winning position.) Ultra-conservative income seekers or investors concerned about geopolitical issues can look to sell covered positions (credit spreads) in the same market.

***The information in this article has been carefully compiled from sources believed to be reliable, but it’s accuracy is not guaranteed. Use it at your own risk. There is risk of loss in all trading. Past performance is not necessarily indicative of future results. Traders should read The Option Disclosure Statement before trading options and should understand the risks in option trading, including the fact that any time an option is sold, there is an unlimited risk of loss, and when an option is purchased, the entire premium is at risk. In addition, any time an option is purchased or sold, transaction costs including brokerage and exchange fees are at risk. No representation is made that any account is likely to achieve profits or losses similar to those shown, or in any amount. An account may experience different results depending on factors such as timing of trades and account size. Before trading, one should be aware that with the potential for profits, there is also potential for losses, which may be very large. All opinions expressed are current opinions and are subject to change without notice.