Many Wall Street pundits have been talking about the Santa Claus rally and the January Effect. In both cases, stocks are expected to go higher based upon a seasonal pattern. This is an appealing idea to trade because if there are reliable seasonal patterns then traders can boost their returns by taking more aggressive trades during those times. Testing can be used to determine whether or not seasonality is tradable. Unfortunately, the testing shows that seasonality is not a sure fire path to profits.

Seasonal trades are those with buy and sell decisions that are based solely upon the calendar. One example is in the common Wall Street wisdom to sell in May and go away. This would represent a seasonal strategy and is based on the belief that stocks generally decline in the summer and early fall months. Stock market crashes are widely associated with the month of October and the best six months of the year to own stocks begins in November. This is another seasonal strategy and would have helped traders avoid the crashes of 1929 and 1987. Losses would have been experienced as markets crashed in 2008 and 2009.

Some traders will look beyond general rules for seasonal trading like we have in those examples and find specific trading days of the year that have a high probability of profits. These ideas are the basis of many infomercials and radio commercials urging you to buy heating oil or orange juice now so that you can profit from proven patterns that occur year after year. These patterns are frequently proven with data mining.

You can easily set up a test to buy on any day of the year, hold the trade for a specific number of days before selling. By chance alone, some of these trades will have a high winning percentage. With enough data mining, you will be able to find trades that would have worked 100 percent of the time in the past. However, because the trades are based solely on a random search of price data, they are unlikely to be as profitable in the future. To have confidence that past performance has any predictive ability for the future, trades should be based on logic rather than data mining.

As the first step in assessing a seasonal strategy, it is useful to consider the question of whether or not there is an underlying rationale to support seasonal trades. For some seasonal patterns, there is a logical reason why stocks should rise and the January Effect is one of them.

The January Effect results in the prices of small stocks outperforming in the first month of the year. Many investors, according to this theory, will sell losers at the end of the year so they can recognize a tax loss. Some of those stocks will still be worth holding and investors can establish new positions thirty days after a sale without losing the tax loss. The result is selling pressure in December and buying pressure in January.

There is a long-term downward bias in the breadth of small cap indexes, so it does make sense that the pattern should be most pronounced in small cap stocks. The advance-decline lines for NASDAQ stocks and NYSE stocks are shown below. A similar pattern is seen in other time periods – the number of stock market losers is greater among small cap stocks than large cap stocks. Stocks being delisted will be almost always be small caps and that explains part of the downward bias. 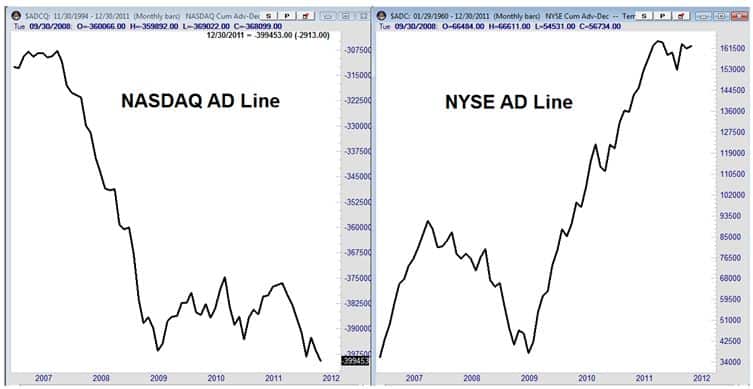 A number of academic studies have demonstrated that the January Effect is present in stock prices and small caps deliver better performance in January. Academic studies generally start with the belief that market prices follow the Efficient Market Hypothesis (EMH). According to the EMH, markets discount the future and the current prices reflect what market participants know about the market. Since prices are efficient, there is little if any opportunity available to traders to make excess profits. If such an opportunity existed, then traders would know that it existed and they would take advantage of it so that it no longer existed. Academic theory is logical, but in reality markets do offer trading opportunities.

A recent example of how the EMH fails to explain the real world is found in the stock of Sears Holdings (SHLD). Anyone who stopped in a Sears or Kmart store over the holiday season would probably have noticed that other stores, such as Target or Macy’s, were faring better. After Christmas, SHLD announced that holiday sales were disappointing and they would be shutting at least 100 stores. The stock responded to the news with a one day, 25 percent plunge. If the EMH were strictly true, traders would have noted the poor sales at Sears and Kmart and been selling the stock before management’s announcement. There are numerous other examples of times that the theory failed to fully explain the behavior of prices in the real world.

Some of these failures of the EMH are well documented and widely accepted as anomalies to the theory. Anomalies include the fact that over the long-term, small cap stocks tend to outperform large cap stocks and value stocks fare better than growth stocks on average. The January Effect is considered to be another anomaly to the EMH, and studies have demonstrated that stocks deliver better returns than expected in that month. Academics use measures such as excess returns or risk adjusted returns to find anomalies. Traders are simply concerned with profits and it is not enough to know that January offers unusual returns; traders are concerned with whether or not the January Effect offers tradable results, measured as profits.

With a logical basis for the January Effect, testing should show that small caps stocks go up in January more often than average and ideally we would see a decline in December, on average. Looking at one month holding periods for the Russell 2000 index, we find that January is actually a breakeven month while December offers the strongest gains. 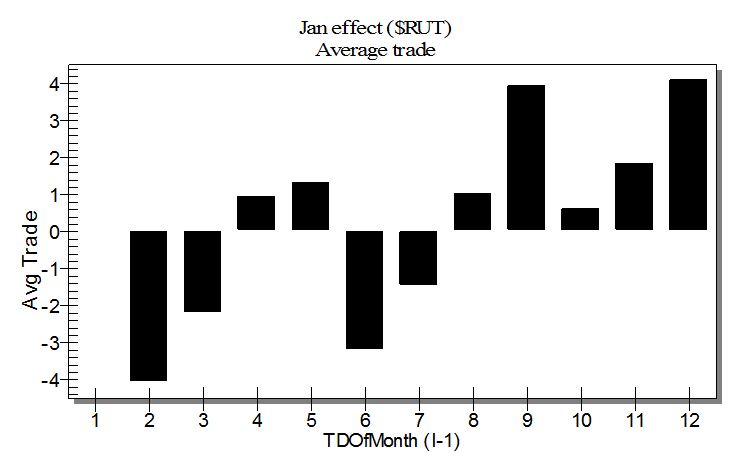 Using the Dow Jones Industrial Average for testing, we have more data available and can see if the January Effect has been a winning trade over time. This is an imperfect test since the Dow includes large cap stocks but it can serve as a starting point for more detailed testing if the January Effect is tradable. 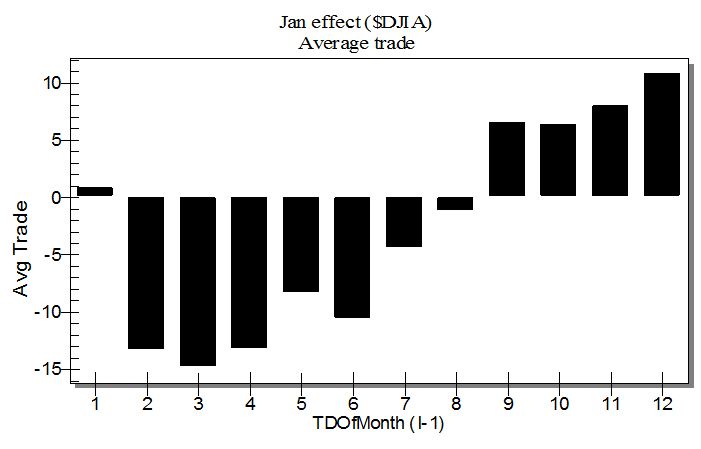 The results are similar and show that December is a better month than January to own stocks, on average.

Seasonal trading strategies most likely originated in the grain markets. There is a seasonal pattern to farming. No matter what the markets would like to do, farmers must plant and harvest crops according to the calendar. Corn offers a visual example of the impact the calendar can have on trading. 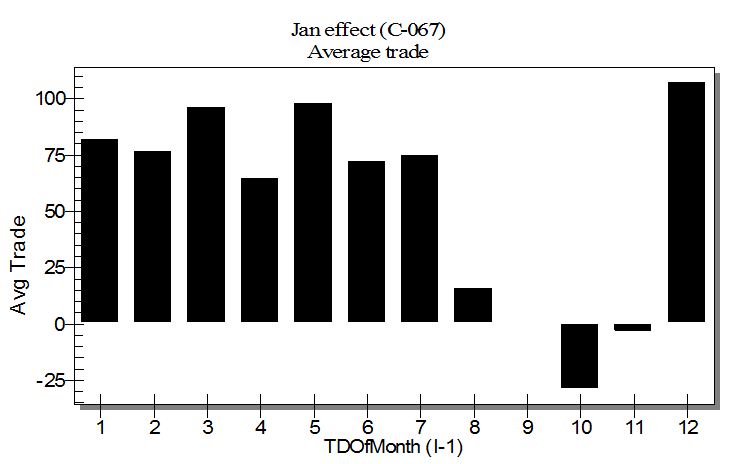 The least profitable long trades in corn occur during the harvest season. As farmers are bringing their crops to market, supply is most abundant and prices show a tendency to be weakest at that time of year.

Kerosene and other fuels also show a seasonal tendency. Kerosene delivers profitable trades in the fall and the first months of winter as demand increases at the wholesale level. Kerosene is also a thinly traded market and is not really tradable for most individuals. 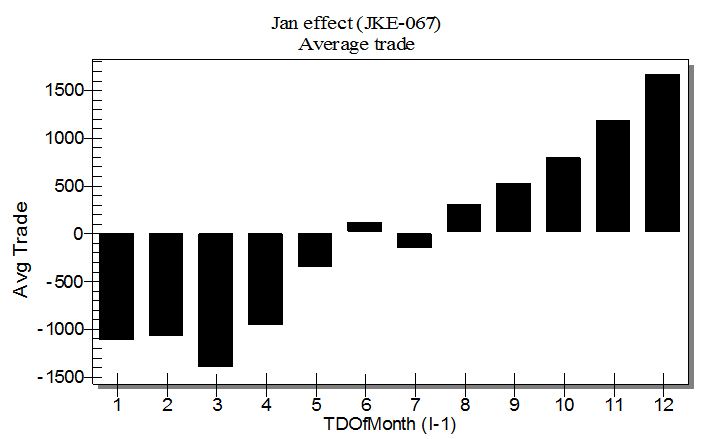 Seasonal trading strategies can be profitable in some cases. However, in many cases they are simply examples of what a computer can find in a data set. Before committing funds to the idea, it is best to identify an underlying logic as to why the trade should work. After that, the idea should be tested. If the test results do not show a winning trading strategy, the seasonal idea should be discarded no matter how well accepted it is among Wall Street commentators and even academics.

The January Effect has been well established as an anomaly to the EMH and small caps have consistently outperformed large cap stocks in that month. However, that does not mean that the January Effect offers a tradable set of rules that small traders should try to profit from. In this case, buying in January and ignoring all other factors would not be profitable. Since a trader’s measure of success is profits, there are better ideas to use as the basis of buy and sell decisions.