These days you do not have to listen to an investor very long before hearing of a boom-bust cycle. The recent internet stock boom followed by a housing boom has left many confused. An objective observer might wonder: what is the investor’s role in these events? Is he just a boat floating in the ocean with no control over what direction he travels? It is more likely that a tidal system is present in markets and many investors are not able to see the pattern in order to set sail at the proper time.

Everyone knows that tidal patterns are present in our oceans. The moon applies a gravitational pull to the earth as it rotates.  This causes the water on the face of the earth to literally be pulled towards the moon, creating a lower or higher tide level throughout the rotation. In some cases a spring tide is experienced and the changes in water level are more dramatic than normal. Tidal charts are readily available and create very accurate estimates of exactly when the high and low points of the cycle will be reached. If your ship can only leave the harbor safely at high tide the chart will tell you exactly when that event will occur.

A thorough understanding of tidal patterns is applicable in situations other than coastal living; most importantly for the purposes of this article, markets. Consider the graph below and assume the Y axis measures price and the X axis measures time: 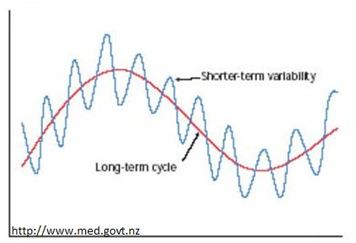 As the red line progresses through time it forms a seemingly smooth pattern of price action. The blue line is essentially moving along the same path as the red line but much more frequently travels away from and towards the mean. A practical application of this concept can be seen as we objectively analyze the major stock market averages. They have technically been in a bear market since 2000. During the subsequent decade there were several short-term rallies that offered trading opportunities but did not change the long-term cycle.

Over time, several brilliant economists objectively noted such cycles. Nikolai Kondratiev was one of these whose work formed the basis for many economists that followed him. Kondratiev discovered that Western Capitalist economies tended to form 50- to 60-year cycles of boom followed by depressions. This study was refined into measureable business cycles that have since been called Kondratiev Waves. The risk that accompanies the ability to spot these types of cycles is that powerful, oppressive leaders fear that the economist may use this ability to threaten their power. Kondratiev suffered the fate of many visionaries. After serving an eight-year sentence in a Soviet prison he was re-tried, sentenced and executed all in the same day.

Some readers will write this off as an action that only an oppressive regime such as Stalin’s Soviet Union could commit. While this thought seems to match up with what was taught in civics class, it deserves further review. Martin Armstrong is an American economist who just spent over a decade in Federal prison on a contempt of court charge. What is fascinating about the Armstrong case is the two-pronged justification for holding him without conviction for nearly eleven years: on the one hand, he was accused of controlling and manipulating the world economy, yet on the other he was portrayed as a crackpot economist guilty of commingling funds and a variety of other vague (yet unproven) charges. You are welcome to study the facts and come to your own conclusions about what happened to Mr. Armstrong. We suggest you first investigate the ultimate fate of his computers, economic models, and property upon his imprisonment.

What did Armstrong discover and why did it lead to his harsh, unjustified and third-world style punishment? Having actively advised capital through the 1970s and early 1980s, Armstrong had witnessed several boom and bust cycles. Commodities, currencies, metals, and even nations had experienced extreme turbulence during this period. As a student of not only economics but also history, he studied each of the 26 panic events that occurred from 1683 to 1907. By his calculations, that meant that an event occurred every 8.615384615 years. What was the significance of this number? Most people would write it off as a political or nature driven event but was it possible that those catalysts were also influenced by cycles?

At this point Armstrong was certain that there was a pattern behind these cycles even though he was uncertain of its nature. He is famous for saying, “Identify the cycle…..Sort out the why later.” A breakthrough came when he multiplied the average time between occurrences by the exact number of days in a year. Due to the calendar impact of leap year that number is 365.25. The equation was:

This number jumped off the page immediately. It was exactly Pi * 1,000. Pi is a very significant number and throughout the course of history it has emerged in many aspects of human life. The number is a mathematical constant and represents the ratio of a circle’s circumference to its diameter. The history of this strange number sequence dates back as far as 2,000BC. Several instances of its use are recorded in ancient Egyptian history.

If Pi was so relevant in geometric structures, especially circles, then logically there was a connection to these cycles. Armstrong determined that the cycle would include two 4.3 year parts. Each of those parts would include a 2.15 year rise to a crest and similar 2.15 year return to the mean. Six 8.6 year cycles would form a larger 51.6 year cycle connecting with Kondratiev’s findings earlier that century. Then, six 51.6 year cycles connect to form a 309.6 year super cycle. With these findings Armstrong correctly predicted the 1987 US stock market crash, the 1989 all-time Nikkei high, the Russian sovereign debt crisis and the peak of the housing boom.

This new insight helped Armstrong develop The Economic Confidence Model. After accurately predicting several events some began to think it was a crystal ball. Humans seek certainty and are constantly searching for a linear path through life when none exists. What Armstrong and other intelligent economists realized is that the model predicted shifts in energy. These energy shifts could be characterized as turning points. At times they predicted events to the day but more importantly they predicted when the tide would begin to move in another direction. In the chart displayed at the beginning of the article this would represent the red line or the long-term trend.

Understanding trends and noticing cycles is critical in the context of investing. Getting stuck in the short-term blue line can distract you from the long-term trend. Nearly all significant investment profits are realized when trading with the major trend. Just merely understanding that there are cycles in every aspect of an economy is an acceptable first step. Next, time should be spent noticing, identifying and accepting these cycles. Only then can capital placement decisions be made. It is entirely possible that we will never know the true facts behind what drives these trends. Just being on the right side of the trade is enough for now.

By Edwin B. Tucker