Natural Gas and Natural Gas stocks have been the darling of several high profile media pundits for going on 18 months. It’s the “fuel of the future” and “rapidly developing” technology will soon mean new avenues of demand. “Buy it now” they say, “quickly, before it goes back up.”

If you had followed that advice, chances are you’re either eating your losses now or have simply dug in to wait out your “longer term” investment.

Natural gas may very well be the fuel of the future and it’s prospects down the road as an alternative fuel are looking brighter.

However, in the near to intermediate term, the fundamentals are a mess. And future increases in demand may be offset or exceeded by future streams of supply.

To put it simply, we are in the midst of a natural gas supply glut – one that will not be rectified anytime soon.

The unnamed gentlemen mentioned above are well respected by the investment community (and by these authors) and cannot be blamed entirely for miscalling the natural gas market. Gas prices were sacked by two simultaneous occurrences that drastically altered their price path – neither of which whose impact could have clearly been foreseen. These two forces combined, quite coincidentally, at the same time:

1. A recession led dip in demand which hurt many commodities. However, natural gas was hit particularly hard as it derives a large part of its demand from the commercial sector as opposed to the individual retail sector.

2. A rapid expansion in the current and future supply of Natural Gas

It is a revolutionary shift in the way natural gas is extracted from the Earth that has reshaped the fundamentals of the market for good. The process is known as hydraulic fracturing and horizontal drilling and it allows drillers to access natural gas trapped in shale rock formations. This new process has resulted in massive discoveries of new natural gas wells in the continental US. Notable examples are the Barnett Shale in Texas and the Marcellus Shale in Pennsylvania and New York. These once inaccessible supplies have come online just within the last few years and it is estimated that these along with other new shale rock discoveries possess enough new supply to power the United States for the next 100 years or more.

The Barnett Shale alone now accounts for 7% of American gas supplies. This new output resulted in over 600 billion cubic metres of US production in 2009, most likely vaulting the United States ahead of Russia as the worlds #1 producer of natural gas.

Almost in tandem with the surge in American output, the recession resulted in a 3% drop in US demand for

This has allowed near term supplies of natural gas to accumulate, putting them near historical highs for this time of year (See Chart Below). 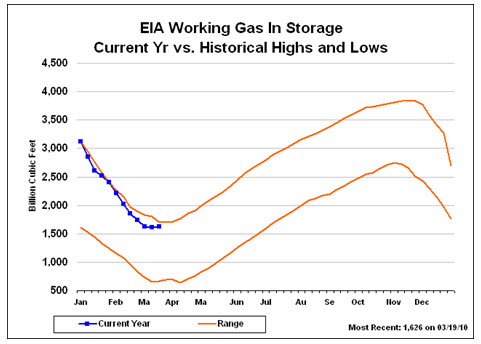 Natural gas supplies remain near historic highs for this time of year. Inventories tend to accumulate after April in the US as the peak demand winter season has passed.

The longer term ramifications of hydraulic fracturing and the new reserves of natural gas have yet to be seen. However, for the shorter term, call sellers may yet have opportunities to collect deep out of the money premium.

Natural Gas supplies have just reached the point of the year where on hand supplies are typically at their lowest. Consequently, this often results in a time of year where prices will be at their highest.

That has not happened this year.

Perhaps this is due to the relative glut of supply on hand. Perhaps it is institutional traders unwillingness to buy a market where a whole new avenue of supply has just opened up. (In case you haven’t guessed, this doesn’t happen very often.)

Regardless, April is the time of year where onhand inventories start to build as the peak winter demand season has passed. This has often been associated with price weakness (past performance not indicative of future resultes).

The question is, if natural gas cannot put together some kind of rally when prices are near what is generally the lowest point of the year, how are they going to respond when supply starts to build again? Even if one assumes a moderate recovery of gas demand in 2010, it will take a long time to eat down inventories to levels anyone would consider “bullish.” This is especially true given what is expected to be record US natural gas output in 2010.

There will, of course, be rallies in natural gas as there will be in any commodity. However, we expect these to be of a limited nature given the supply issues now facing this market.

Would advise using any such rallies as opportunities to sell deep out of the money calls in natural gas over the next 4-8 weeks.

To learn more about selling options in the commodities markets, feel free to visit us on the web at www.OptionSellers.com. A complimentary Option Seller Information Pack is available to qualified investors.