©2007, Reprinted with permission of The Trader’s Journal magazine (www.tradersjournal.com)

Technical analysis to predict price action in the financial markets is just another factor used to put the odds in favor of the trader. But relying on any single indicator to provide signals for a trade is not advisable. Since indicators derived from price action are lagging indicators, they confirm a signal only after the move has been initiated.

If another factor confirms the same signal, the probability of a successful trade is increased. The second confirming factor could be another indicator, but ideally the price action should confirm the signals shown by the indicator. In this regard, candlesticks are found to be very effective.

We will look at a system combining the MACD indicator with a candlestick ‘Inside Bar.’ This system can be effectively used in larger timeframes from 4-hour bars to the monthly bars.

First, let’s develop an understanding of the basics of each of the elements.

The MACD is one of the most popular technical indicators used in technical analysis, since it can be used either as a trend or momentum indicator.

The distinct advantage of this indicator is that simply observing whether the MACD signal line or its histogram is above or below the zero line can be used to identify a trend. While the MACD also interprets whether price is overbought or oversold, we will concentrate only on the trend part of the equation for now, which can be briefly described as

An Inside Bar forms when a market has a small range day as compared to the range of the previous day. This simply means that it is a bar with a lower high and a higher low than the previous bar.

As illustrated in this example, the high and low of the current bar are within the range of the previous bar. This is often interpreted as price taking a breath and being uncertain of the direction of the market. The subsequent breakout of this Inside Bar can cause volatile movement.

When the characteristics of these two entities are combined, it is possible to effectively form a system with the following conditions:

Similarly, the low of the inside bar should be used to position a sell stop when the MACD is below the zero line.

Stops – If triggered, the stops should be placed below the low of the Inside Bar in case of a long trade and above the high of the inside bar for a short trade.

Since we can afford to keep tight stops, the risk-to-reward ratio for the trades is usually very high.

Exit – It is advisable to follow trades with a trailing stop to lock in profits since no specific exit strategy is defined. The general rule of thumb would be to exit / take profits when the MACD starts to show a reversal of momentum or when the signal lines / histogram cross in the opposite direction.

Situations where the Strategy would not be Effective

This strategy would be ineffective in a range bound market where price is consolidating. In this type of market, Inside Bars could be forming due to price moving within a small range while the MACD is also flat around the zero line. In such cases, it is better to stay out of the market until there is a noticeable movement in price. 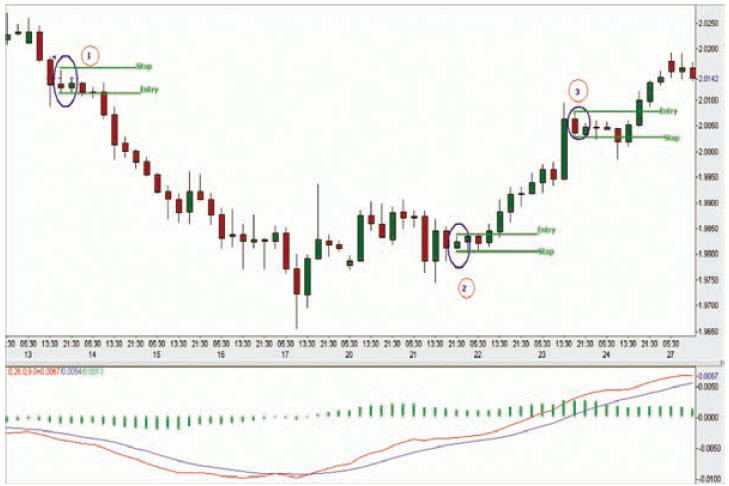 Lets take a look at the application in the following examples.

In the set-up marked (1) located on the left side of the screen shot, we observe the MACD as soon as we have an Inside Bar. In this case, the MACD lines as well as the histogram are both below the zero line indicating strong downward momentum. The sell stop order is placed below the low of the Inside Bar with the stop-loss buy order placed above the high of the Inside Bar.

In the set-up marked (2) located on the lower right center of the screen shot, the MACD lines have crossed upwards and the histogram closed above the zero line. This indicates upward momentum. The buy stop order to initiate the position is placed above the high of the Inside Bar with the sell stop-loss order placed below the low of this Inside Bar.

It is important to note that we are not entering a trade simply on the formation of the Inside Bar. We are entering the trade on a Buy/Sell Stop order, effectively letting the market confirm our trade.

This can be seen in the setup marked (3), where a buy stop order is placed above the high of the Inside Bar. This was a pause/ pullback in the prevailing uptrend and in such cases it is difficult to make a call whether the trend will continue or turn into a possible reversal.

Since the MACD is still showing an uptrend with the signal lines and the histogram in the positive zone, we place our buy order above the high of the Inside Bar and let price confirm the move.

If momentum had not been strong enough, price may not have closed above the high of the Inside Bar. We have combined the characteristics of these two market indicators to achieve a higher probability for a trade.

As we can see in the chart, the set-ups provide a precise point for trade entry. If we had relied solely on the signal provided by the MACD, the exact entry could not have been pinpointed.

The identification of this system or the set-up is the Inside Bar.

In effect, the set-up is waiting for price to catch its breath, anticipating that the breakout of the market will be volatile while using the MACD to provide the clues for market direction.

While this may not work all the time, it should at least keep us out of losing trades.

Sunil Mangwani is a Physics graduate with a Diploma in Financial Management. He has been trading the Forex markets for the last 5 years and devised simple trading strategies based on his vast knowledge and in-depth study in the field of technical analysis. He has worked as content provider and article writer with different websites such as www. surefire-trading.com, www.trading-strategies. info and www.guppytraders.com. He has also developed video modules on specialized topics and has contributed technical articles to the Traders magazine.

The realization that it is essential for every trader to have proper education and mentoring led to a desire to create such a community for other traders. Thus, the FX Instructor project was born with an aim to share his extensive knowledge of successful trading with others and to coach individuals who want to make a change in their trading methods. He is the “Director of Education” at www. fxinstructor.com where he conducts the Live Trading Room & online webinars on Forex trading. All the details of his published articles and YouTube videos can be seen at www. sunilmangwani.com. He can be contacted at sunil@fxinstructor.com & shellcon@eth.net