I had the opportunity to interview Mr. John Karnas, CEO of Trend Following Trades on Thursday, May 23rd. John has a background in Mechanical Engineering and is a licensed pilot. Up until age 30 John didn’t even know what a share of stock was. He had an argument with his father-in-law who told him that mutual funds weren’t stocks. As he explored the instruments he became more fascinated with the prospect of making money trading. He started his journey in the early 2000’s and it took him 5 years to “get it”. In other words, figure out how he could practically and pragmatically make money from trading.

As a successful trader he was attracted to Trend Following Trades because he liked the solution and recognized that this was something unique. He was asked by Trend Following Trades to run their trade room and teach new traders the ins and outs of trading. Eventually he bought the entire company from the original owners and is constantly looking for new and innovative solutions to help traders. His wife, Sylvia trades with him! Can you imagine that? When I asked John about this he claimed “my wife has more discipline than I did when I first started out”. I asked him how he got his wife involved and he said “I wanted to be able to teach someone who doesn’t necessarily want to listen to me, I figured if I could that; I could teach anyone.” When you think about it, it actually makes sense. Now his wife trades for a few hours a day and is done.

Trend Following Trades is dedicated to the idea that traders aren’t born, they are made. As such, he strongly advocated the idea of a Trading Plan, a Trade Journal and mentoring traders. He recognizes that trading can be a “humbling experience” and any trader who’s been around can attest to that. I call the markets “The Great Equalizer” because regardless of background, education, etc. we are all equal in the eyes of the markets. As John can attest even Mechanical Engineers can lose money. I’ve looked at Trend Following Trades and one of the things that immediately struck me is the number of videos John has on the site. He doesn’t want people who want to turn their PC’s into an ATM because he knows (as I do) that trading is work and it requires a unique dedication and focus. John’s first video is on trading plans and the importance thereof. He is a believer in training, backtesting, etc. to determine success.
The next thing that struck me is the charts. I’ve been trading for over 20 years and I don’t believe I’ve ever seen cleaner charts. 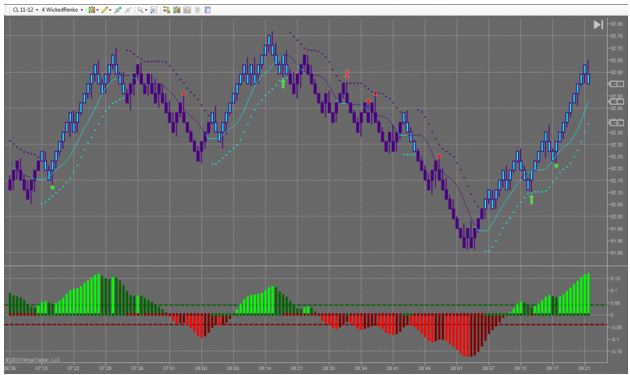 This is the chart of the CL crude oil contract. It doesn’t have a lot of indicators on it as John is not an advocate of “loading the bus” with indicators. Additionally John doesn’t advocate the notion of scalping but rather embraces the idea of following a trend. Hence the name Trend Following Trades. As any reader of Market Tea Leaves knows, I don’t advocate scalping as a strategy and never have. To me it never made sense, why risk your hard earned trading capital for a 2 or 3 tick gain when if you’re patient and wait for the proper setup, you can earn far more? All of the bars shown above are Renko Bars, not tick or minute. I too use Renko Bars as with them you’ll know where the next bar is going to open.

My interview with John can be viewed here:

It’s about 50 minutes in length but will give you a good insight as to what Trend Following Trades is all about. They don’t offer a free trial but the solution doesn’t cost an arm and a leg either.