As of this writing (March 17, 2008), the status of interest rates sends some important messages to the stock market investors. This article aims at reading and decoding these messages.

DEBT SECURITIES AND THE STOCK MARKET

In his book, “Intermarket Technical Analysis” (see [2]), John Murphy stresses the positive relation between the bond market and the stock market: “The bond market usually leads the stock market”. This relation is not limited to long term bonds but it also extends to debt securities of all maturities (T-Bills and T-Notes). There are three main reasons this relation exists and all of them are based on the fact that the debt securities prices move in the opposite direction of the interest rates:

1. When interest rates are low, companies can borrow cheap money to expand their business thus increase their prospects. Fundamentalist love this and are usually more willing to buy stocks. As you probably know, increased demand for stocks means increasing stock prices.

3. Investors of all kinds (either individuals of institutions) usually look for a satisfied Reward/Risk factor to find out what kind of investment vehicle is the best to be in. In addition, many of these investors use a predefined satisfactory rate of return for their investments as a threshold for switching assets between the various markets. The bond market is significantly less risky than the stock market (especially, the government bonds are considered as “risk free” investments because for example a government can always raise taxes to pay back its obligations) so, when interest rates are high, investing in risk-free securities is more attractive than investing in stocks. By the same token, when interest rates are low investors are more willing to accept some risk for a greater potential return in their money.

There is usually a lag before the behavior of interest rates affect the stock market and practically there is no way of knowing precisely the time duration of this lag. It must also be stressed that, falling bond prices offer a much more strong bearish signal for the stocks than the bullish signal provided by rising bond prices. This is due to the fact that though an overheated economy can be manipulated by just monetary policy, stimulating the economy usually needs both monetary and fiscal policies. Finally, as Murphy points out, the positive relation between bonds and stocks is destroyed in a deflationary environment: Deflation is good for bonds but devastating for stocks. In any case, knowing the implications of the fixed-income securities in the stock market is very important: In a normal non deflationary environment, when then bond market rises, it sends positive signals for the stock market and when then bond market falls, it sends negative signals for the stock market. 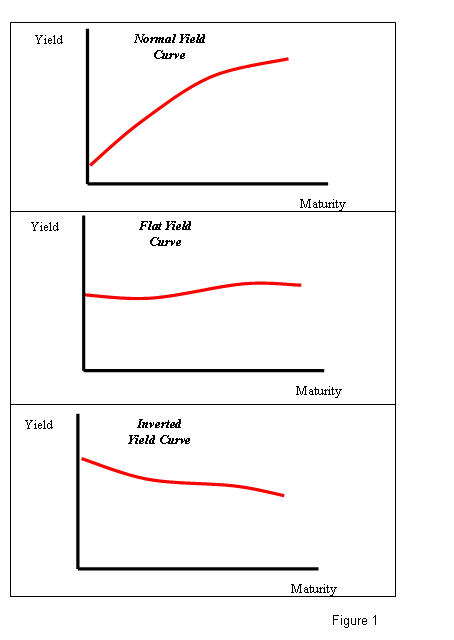 THE YIELD CURVE AND ITS IMPLICATIONS

A line that plots the interest rates (yield) of debt securities having equal credit quality, but differing maturity dates is called yield curve. Not all type of debt securities of the same quality have the same yield and thus the curve is not a straight horizontal line but takes various shapes. These shapes are generally categorized in three classes: Normal, Flat and Inverted. Normally, short term maturities have less yield than the long term maturities due to the fact that the more an investor ties his/her money (thus exposing it in more time-risk), the more he/she requires as recompense. This creates a Normal yield curve and it is generally positive for the economy and the stock market. When, on the other hand, the shorter-term yields are higher than the longer-term yields it is regarded as a sign of economic slowdown or recession thus it is considered bearish for stocks. Inverted curves are present when the Fed has raised short term interest rates (and the left part of the yield curve) to fight inflation. As Peter Navarro points out in his book (see [3]), long term investors might fear that contractionary injections by the Fed could start a recession with deflationary impact so, they may try to tie their money in long term debt securities which in effect will raise their price and lower their yield thus dropping the right part of the yield curve. Finally, a Flat curve occurs when the yields of the debt securities of all maturities are more or less the same. This curve usually takes place during the transition from a Normal curve to an Inverted or the opposite. Figure 1 outlines the typical shapes of Normal, Flat and Inverted yield curves. Note that the steepness of the normal and inverted curves further enforce their implications. Detailed practical information about the yield curve can be found in [3] and [5].

WHAT INTEREST RATES SAY ABOUT THE CURRENT SITUATION?

In figure 2 you can see the performance of the SP500 index (red line) along with the performance of the USB bond Index (pink line) from October 3, 2006 to March 17, 2008. The figure is a screenshot capture from stockcharts.com (see [1]). It is apparent that though the SP500 index is currently in a free fall, the bond market is establishing a steady uptrend. Despite the fact that rising bond prices do not necessarily have a strong positive impact on stocks, a clear bullish divergence between the bonds and the stocks is taking place.

In figure 3 you can see the chart of SP500 from 2000 to March 2008. To illustrate the connection between the yield curve and the stock market which I covered earlier, eight small subcharts (snapshots form the dynamic yield curve of stockcharts.com) show the yield curves at eight different times during this period. The figure says it all. Not only the current (as of March 17, 2008) yield curve is Normal and steep but also the yields are generally low for all maturities. Clearly, the situation as described by the yield curve is not bearish.

…AND WHAT TECHNICAL ANALYSIS SAYS

What technical analysis says about the current situation? My proprietary technical indicators stopped considering the long term trend of SP500 as bullish in November 2007 and the current trend of the SP500 is considered bearish by almost any classic technical analysis tool. In figure 4 you can see that the SP500 is under its 200-day simple moving average and both the horizontal support HL-2 and the upward trendline TL-1 are broken. Also, near the horizontal line HL-1 (a previous resistance) the SP500 index created a confirmed reversal formation (double top or head & shoulders, whichever you prefer).

Interest rates are not just a tool for pure fundamentalists and history has proven that ignoring the debt securities market hurts.

Undoubtedly the current state of interest rates sends bullish signs for the stock market via the bond uptrend and the Normal steep yield curve but the final trigger must be given by technical analysis. One should not only look at what the market MUST do but also look at what the markets ARE doing. The current stock market status is technically bearish and “playing” a bearish game from the long side is not appropriate. From a practical perspective, the behavior of interest rates indicate that any upward reaction by the stock market should not be taken lightly and should not be considered by stock traders as an opportunity for aggressive short positions. Also, any technical bullish sign which will set the latest toping formation of the SP500 index (green line in figure 4) under contestation must be seriously examined as a failure of the formation. Bear in mind that a lot of other factors such as the positions of commercials and small traders in the derivatives market, the insiders activity (see [4]) and the contrary-opinion indicators from sentiment surveys are severely bullish so if a trend reversal from bearish to bullish commences, it will probably be a sudden and abrupt one.

I am not comfortable when my technical analysis contradict my other analysis tools and my answer when being asked my opinion about the current situation is: “well, my perception is bullish… but you know, the trend became bearish and I don’t argue with the trend”. In those tough times when you get contradictory signals form your various analysis tools, the minimum you can do is stop trading aggressively and consider significantly reduce your risk exposure using the derivatives market. If the contradictory signals are really strong and you feel uncomfortable then you can always stop trading completely until all things become clear.

Giorgos E. Siligardos holds a PhD in Mathematics from the University of Crete and a Market Maker/Trader certificate from the Athens Derivatives Exchange. He has given lectures on Technical Analysis in the University of Crete and he has published several articles in the Technical Analysis of Stocks & Commodities magazine. He is currently a scientific fellow of the Department of Finance & Insurance at the Technological Educational Institute of Crete teaching Investment Analysis and Derivative courses. His academic website is:  https://www.tem.uoc.gr/~siligard and he may be reached at:  siligard@daedalussoft.gr. Giorgos is also the creator of Daedalus, an add-on for Metastock, which is available from his commercial website:   https://www.daedalussoft.com