Traders and analysts have been developing market indicators for decades. Many of these indicators are simply measuring the same idea in only a slightly different way since most indicators are based on the same limited amount of market information. For any given time frame, there are only four price data points – the open, close, high and low. Indicators such as the relative strength index (RSI) and moving average convergence-divergence (MACD) use only closing prices. Moving averages generally use closing data, but can be based on any type of data. Because so many indicators are based on the same data, they tend to give similar signals. At the beginning of an up trend, many indicators will begin turning bullish and eventually any trend-following indicator will become bullish as prices rise.

In addition to providing similar signals, many indicators will fail to deliver clear signals in some cases. RSI can be used as an example. This indicator is often used as an overbought/oversold market timing tool. Standard settings in most software packages will show that RSI is oversold when it drops below 30 and is overbought when it rises above 70. One way traders generate signals is to buy when RSI crosses back above 30 and sell or enter short when the indicator falls below 70. Unfortunately, markets do not always provide signals by moving through these arbitrary levels. This problem is illustrated in the chart below. 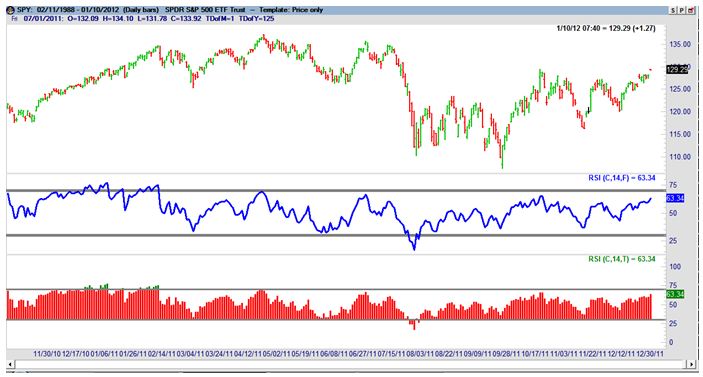 This chart shows the price of SPY, an ETF that tracks the S&P 500 along with RSI in the middle of the chart. RSI has been converted to a histogram in the bottom of the chart to highlight the fact that the indicator gives clear trade signals infrequently. There are several consecutive buy signals shown as green tops of the bars in the left section of the chart and a single sell signal in the center shown as few bars dipping below the 30 level. The timing of the signals would have been ineffective as a trading strategy and numerous tradable price reversals came while RSI was range bound.

While the specific source of many indicators is unknown, that is not the case with RSI which was introduced by Welles Wilder who offered the formula in his 1978 book, New Concepts in Technical Trading Systems. Wilder noted that RSI could be used as an overbought/oversold indicator and he also offered examples where it could be used to spot trading opportunities by analyzing divergences, trend line breaks and RSI chart patterns.

A problem with Wilder’s techniques is that they are still subject to interpretation. There are almost always several trend lines that can be drawn on a chart and different traders frequently disagree on pattern analysis. Given this subjective approach, the results can not be quantified effectively and the results will differ from trader to trader. When a trader is just beginning to make their living from the markets, a more objective and back testable approach is usually best. With that in mind, we will review different ways to apply RSI based on clearly defined rules.

RSI can be applied to the markets as an “always in” strategy. With this approach, buys are made when the indicator rises above 30 and those positions are reversed when the indicator breaks below 70. Those simple rules identify a large number of winning trades in SPY using all available daily data for the ETF back to 1988 and deducting $10 a trade for commissions and slippage. While more than 60 percent of the trades are winners, the system loses money. Long trades win more than 85 percent of the time and they are profitable. As a long-only strategy, this would be an effective market timing strategy.

An astounding 93.5 percent of trades are winners using a threshold value of 40 to buy the SPY. Sells are still taken when RSI falls below 70. This strategy averages about one trade a year and is invested about 60 percent of the time. Using the higher value of RSI dramatically lowers the risk and this could be a very useful timing strategy for retirement accounts. While this strategy reduces risk, it fails to beat a buy-and-hold strategy. RSI long only provides a gain of about 6.8 percent a year while buy-and-hold averages about 7 percent a year over the test time frame.

To study the use of indicators on indicators, adding a moving average to the RSI could be a useful starting point to understand the concept. This idea is shown in the chart below. 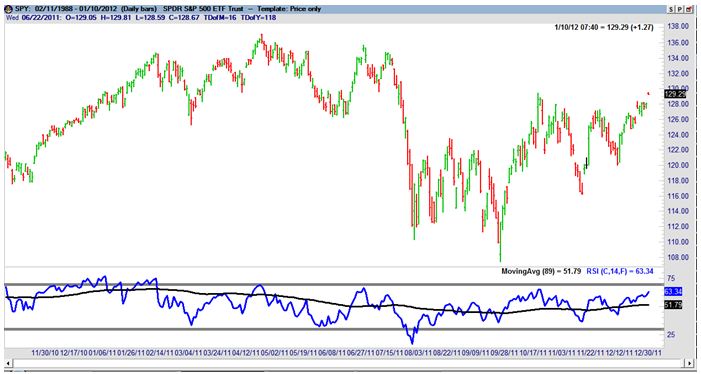 The moving average (the black line in the chart) is calculated on the value of RSI. Signals would be generated when the indicator crosses above and below the moving average. While this idea is useful for showing the idea of how an indicator can be applied to an indicator, it is not a profitable trading strategy in back testing. Moving averages are designed to catch trends and will not work well on oscillators. There are a large number of whipsaw trades with this idea and it catches very few price trends.

Applying the stochastic formula to the RSI can be helpful. The stochastic formula places a value in context relative to its recent range. It is a very useful formula when applied in this manner to a variety of indicators. Larry Williams has demonstrated this technique for many years, as has John Bollinger. Both of these individuals are among the leaders in market analysis and both have come up with many innovative ways to look at market data over the years. An example of the stochastic formula applied to RSI is shown in the next chart. 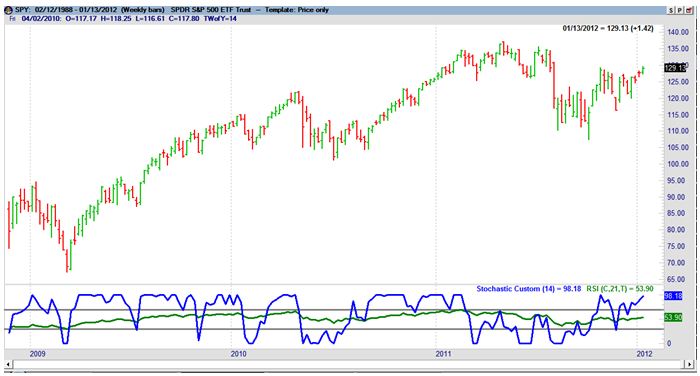 The signals from the stochastic (the blue line) are clearer and more frequent than they are from RSI (the green line). There are still missed trading opportunities and losing trades but visually, this approach seems to have advantages over the raw indicator.

Testing shows that the stochastic approach reduces risk over the long-term, when risk is measured by the total drawdown of the trading history. Only 60 percent of the trades deliver a gain but the annual gains are equal to what the buy-and-hold earns over the test period. Returns average about 7 percent a year and the reduced risk, in dollar terms, could make this appealing to long-term investors.

Traders could also get solid returns based on this idea with a diversified basket of futures. Using just RSI as a trading tool would result in losses for the futures trader but using the stochastic formula would be a winning strategy. Returns average only about 7 percent a year, similar to the gains available in the stock market over the test period. Futures use leverage and can be traded with smaller accounts, which would be a reason that small traders might consider this strategy. There are better strategies available to futures traders, such as the four-week rule which I have written about before.

An advantage of using a stochastic of RSI in the futures market is that the signal is correct about 60 percent of the time, a fairly high percentage of winning trades for these markets. Combined with other indicators, this could lead to very profitable and low risk trading strategies.

Adding indicators to indicators has the advantage of making the original indicator easier to interpret. This is especially helpful for analysts, or for forming market opinions. For traders, this idea does provide a way to reduce risk, even if returns are only improved slightly compared to a buy-and-hold investment. Risk reduction in a retirement account can help avoid the large losses that delayed many plans as bear markets unfolded twice since 2000.

This is of course only a starting pint for the idea and many other variations and back tests are possible. Indicators can be added to any indicator and this could be used as just one of several rules in a strategy. This is a profitable idea and worth the time for additional study.