One of the first lessons that new traders are taught is that one of the keys to success is to cut losses and let winners run. This almost always leads traders to believe stop loss orders should be used to cut losses and are a valuable part of any trading strategy. Individual traders also seem to place stops under the market and forget about them, knowing their losses are limited.

Before testing this idea, a single chart example can provide a dramatic demonstration that individual traders seem to enter standing stop loss orders.

Many individual traders use exchange traded index funds to invest. They believe that active managers can’t beat the markets so turn to indexes as an alternative. The S&P 500 ETF Trust (SPY) is a popular ETF to use as an investment in the S&P 500. Individual investors also often believe that management fees are as harmful to their wealth as active management and they seek the lowest cost index fund. SPY currently has an annual expense ratio of about 0.09 percent. A competitor, the iShares S&P 500 Index Fund (IVV), also has a current expense ratio of 0.09 percent. At times, the IVV has been slightly cheaper and it has gained a reputation in some individual investor communities (many of whom follow the advice of index fund pioneer John Bogle to avoid all unnecessary expenses) as the preferred choice.

An investor focused on expenses and buying ETFs is most likely a do-it-yourself investor. They will learn all they can from the popular media and they will understand that using a simple stop rule would have helped them avoid the losses of the bear market that started in 2008. Implementing investment advice that they could also have obtained from The Who, they place stops about 20 percent below the market and go off to work knowing “they won’t be fooled again.”

We can see evidence of what stop orders look like in the trading of IVV and SPY on May 6, 2010, the day that the Flash Crash occurred. The Dow Jones Industrial Average famously fell about 1,000 points in 20 minutes that day and many other stocks suffered steep sell offs in that time frame. But prices quickly recovered and the markets closed almost unchanged that day.

On a normal day, IVV and SPY track each other very closely. Both opened near 116 on May 6, 2010 and both closed near 113 that day. But in the moments of the Flash Crash, the impact of stop orders drove IVV to a low of 88.42 while the SPY never fell below 105. The only possible explanation I can see is that stop orders in IVV were so plentiful and widely placed that they prevented arbitragers from keeping the IVV ETF in line with the index. An intraday chart shows gaps lower throughout the 20 minute drop and then a gap back up. At 88.42, some trader made a riskless profit at the expense of the individual who sold their holdings into panic. 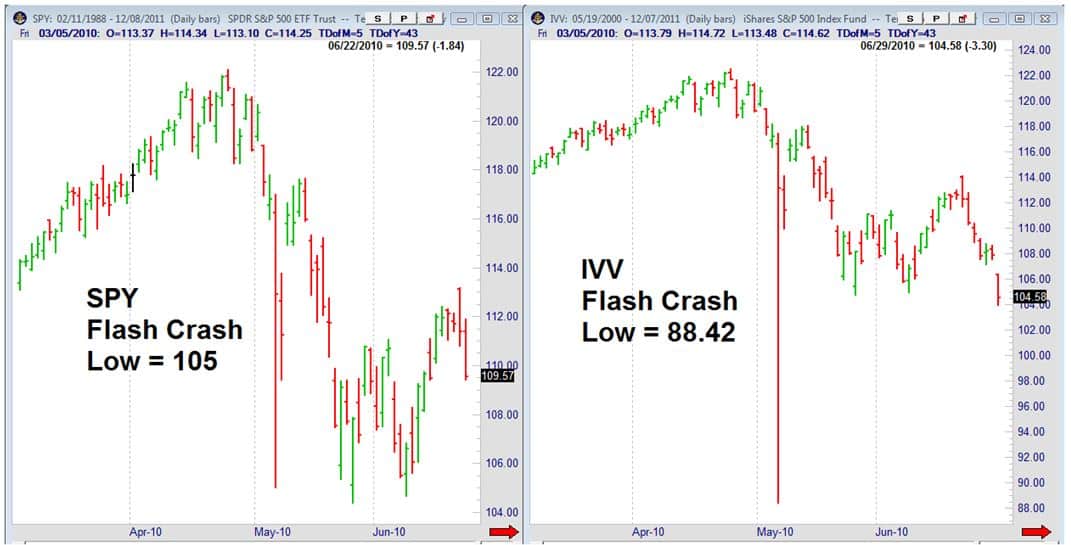 Individuals with mental stops (a level below which they will sell but without an actual order entered with their broker) were able to get out of IVV the next day at a better price. The problem with stop loss orders is that sometimes they fail to protect capital and simply make the loss permanent.

One example is dramatic, but not statistically significant. Testing is needed to assess whether stops help or hurt in the long run.

Before presenting test results, it is important to understand the purpose of a stop loss order. Some think of them as a way to avoid large losses. If a stop is set at $1,000, for example, that is assumed to be the maximum loss on any single trade. This thinking ignores the reality that markets gap and the loss could be significantly greater than that. The order will be triggered when the market trades through the stop level. It will not necessarily be executed at that price. In a day like the Flash Crash, stops became market orders and were filled at significantly lower prices. Slippage of 2 or 3 percent on each order is likely to be the best case that an investor could hope for in a market decline.

Another reality is that the markets exist to execute orders. If you have a stop order entered, the market doesn’t know if it is a stop loss or a stop designed to enter a trade at a better price. It is the market’s function to execute the order if possible. On days where the price action comes close to your stop price, the order itself does act as a magnet for price. If the market is declining, as it did in the Flash Crash, it will reverse when all open sell orders are filled, and that is exactly what happened that day.

Given these facts, it should be expected that stops will have an adverse impact on performance.

In testing, a stop loss level of 10 percent will be used. That value is selected because a stop is intended to protect against catastrophic losses of capital. Ideally, they will help the trader avoid the largest losses.

A simple system test is to apply the MACD indicator to the e-mini S&P 500 contract. The strategy is always in the market – long when MACD is greater than zero and short when it falls below zero. Default settings for MACD are used on daily data. This very simple system is profitable on the e-mini. About 64 percent of trades are winners and the system has a profit factor of 1.20. The profit factor is the ratio of gross profit compared to gross loss. Having a profit factor greater than 1.00 signifies there is more gross profit than gross loss in the system. It is a quick way to evaluate a system but should not be used to assess the overall system’s tradability. Other factors are much more important, like the worst draw down or maximum number of consecutive losses.

Adding a stop loss to this strategy hurts performance. We’ll add a stop loss of 10 percent of the initial trade, selling if prices move more than 10 percent against the position on any trade. The number of winning trades declines to 43 percent and the profit factor falls to 1.12. Total profits decrease by more than 50 percent.

Results with a stop loss are a little better on a diversified basket of futures using the MACD strategy. Without a stop, 31 percent of trades are winners and the profit factor is 1.48. Adding a stop decreases the number of winning trades to 29 percent but the profit factor declines only slightly to 1.45.

The futures tested included crude oil, cotton, the US dollar index, feeder cattle, five-year Treasuries, copper and sugar. Commissions and slippage of $45 per round turn were deducted from each trade.

Using the same basket of futures, tests were also completed on the Donchian strategy. This well known system is named after analyst Richard Donchian who is considered by many to be the first to publish trading system rules. It is always in the market, taking a long position when prices move to a new four week high and reversing to a short position when price falls to a new four week low. In testing, we used 20 days and daily data although results would actually be a little better with weekly data.

Back test results likely minimize the damage that would be done with a stop loss order. In a fast moving market, the trade would most likely be filled at a worse price than the stop level and testing assumes it is filled with the same level of slippage as any other order.

Stop loss orders do little more than provide a false sense of comfort. In testing, they usually decrease profits. The best way to preserve capital is to have a well designed trading system with a high probability of success. The Donchian strategy described above fulfills that objective better than a more complex strategy with stops.