The bullish Three Inside Up reversal pattern occurs during a downtrend. The first two candles are a Bullish Harami, a two day pattern that has a small body day completely contained within vertical range of the previous larger candle’s body. This formation suggest that the previous trend is coming to an end. The smaller the second candlestick, the stronger the reversal signal. The Bullish Harami is confirmed by a third white candlestick, with a higher close than the second day. 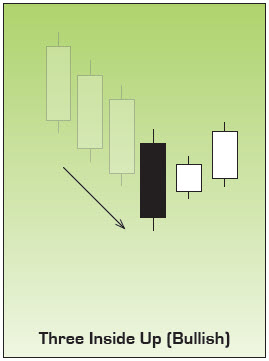