If trading can be reduced to a well defined set of rules, then market forecasting can also be defined by testable rules.

Many traders like to develop general market outlooks and use these opinions as a guide to trading. For example a trader may be very bullish on stocks because the overall economy seems to be growing or earnings reports from most companies are beating expectations. It is difficult to trade on such general guidelines, but a problem with opinions like this is that trading psychology can be severely impacted by holding strong opinions. Bullish traders may be reluctant to enter short trades, or may hold onto a losing long trade for too long. Systems trading requires following signals but it is human nature to want a market opinion that can be shared with others.

Not content with being simply bullish or bearish, traders are often trying to pick exact tops and bottoms. A number of studies have concluded that market timing doesn’t work. In a paper published in 2001 called “A Nonparametric Test of Market Timing,” the author reached the conclusion that attempts to time the stock market by professional fund managers produced negative returns. The managers were wrong more often than right. That paper also provided references to 41 other studies which reached the same conclusion. If predicting the general trend is impossible even for professionals, forecasting an exact inflection point in the market should really only be considered a hobby. Some rules can help with this task. Having rules will at least allow a trader to know when to change their market call.

To make a bullish or bearish call, traders can look at a moving average. This is an indicator that is trend following by definition. The moving average lags the current price action and smoothes short-term volatility. For the very long-term direction of the market, a 10-month simple moving average can be used. Mebane Faber and Eric Richardson have detailed the advantages of a 10-month moving average in “The Ivy Portfolio” (2009, Wiley). From 1900 through 2008, being long the S&P 500 only when the index was above the month end moving average would have provided an average annualized return of 10.45 percent a year, more than a point better than the 9.21 percent return from a buy-and-hold investment. The same rule can be applied for market beating returns in bonds, real estate indexes, international stocks and commodities.

Although a 10-month moving average provides a timing tool that outperforms the markets in the long run, very few investors could actually stick with this system. It offers a signal well after the market has turned, and most investors prefer to get in closer to a bottom than this system will. Despite limiting losses in the 2008 bear market, the signal to get back into stocks would have come four months and more than 40 percent after the March 2009 bottom. The lesson is that reducing risk comes with a steep opportunity cost.

Another area with limited profit potential that occupies a great deal of time for many traders is spotting bubbles. Former Chairman of the Federal Reserve Alan Greenspan testified before Congress in 1999 that, “Bubbles generally are perceptible only after the fact. To spot a bubble in advance requires a judgment that hundreds of thousands of informed investors have it all wrong. Betting against markets is usually precarious at best.” Analysts should consider that as the internet bubble was taking hold and the residential real estate bubble was in the future, with access to unlimited data, Greenspan basically punted on trying to forecast markets.

Bubble spotting has limited profit potential because the odds of being right are stacked against the trader. However, John Paulson demonstrated in 2008 what can happen when you correctly call a bubble. The hedge fund manager made a reported $20 billion for his fund and about $5 billion for himself by betting that the housing market was in a bubble. With possible gains like that, traders will continue pursuing trying to spot bubbles.

It is possible to define rules for a bubble, although the rules will be imperfect and only work sometimes. However, imperfect and fallible is the definition of a trading system, so the effort could still be profitable.

Economists will say that the prices in a bubble are not supported by the fundamentals. This definition is not tradable. Fundamentals can be described in general terms, but no one ever actually knows the true value of anything. Earnings can be restated which makes stock market valuations especially unreliable. Commodities have no easily measured fundamental since supply and demand factors are usually unknowable in real time. Real estate values in part depend on inflation and demand factors that are also only known with certainty only in hindsight. Although anyone can argue that a value is too high, Greenspan’s observation about bubbles is especially applicable to fundamentals.

From a simple trading perspective, a bubble is when prices move too high, too fast. That is definable in trading terms.

Beginning with the stock market, a widely cited figure is that stocks offer an annual rate of return of about 6 to 9 percent in the long-term. Among others, Jeremy Siegel has shown this in “Stocks for the Long Run” (2007, McGraw-Hill). Siegel also showed that returns vary greatly in any single year and finds that the standard deviation is about 17 percent a year. We would expect bubbles to be extremes, when the annual returns exceed the average by a very significant amount. Bubbles occur when the annual return is several standard deviations above the average.

Bollinger Bands® are a standard technical indicator and a simple way to apply the standard deviation to the ideas of a bubble. Bands are drawn two standard deviations above and below the average and in practice, contain about 90 percent of the data. In theory, Bollinger Bands should contain about 95 percent of the data but the reality of market action does not precisely follow mathematical rules.

Placing Bollinger Bands on the annual rate of change can be used to spot times when prices have gone too far, too fast. When the rate of change is greater than the upper Band, prices can be considered to be in a bubble. That would represent approximately 5 percent of the price action, a relatively rare occurrence.

Experienced traders know that an overbought market can become even more overbought, and shorting in the face of strength has led to large losses for many traders. The signal that the bubble is ending would be when the rate of change falls back into the Bands.

This simple rule spotted a “bubble” in stocks in July. Stocks were up more than 30 percent over twelve months at that time and the sell signal came at the top. In the charts below, the 52-week rate of change is shown and the Bands are set to show two standard deviations using a 52-week moving average of the returns. 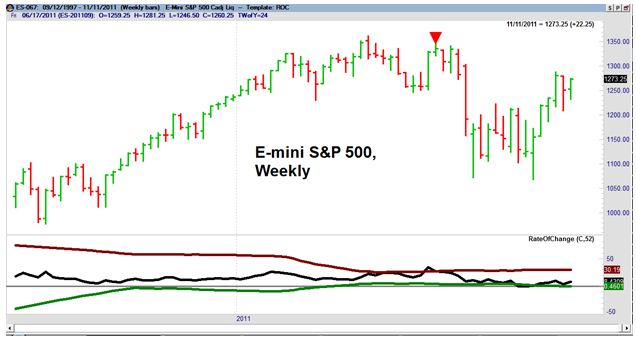 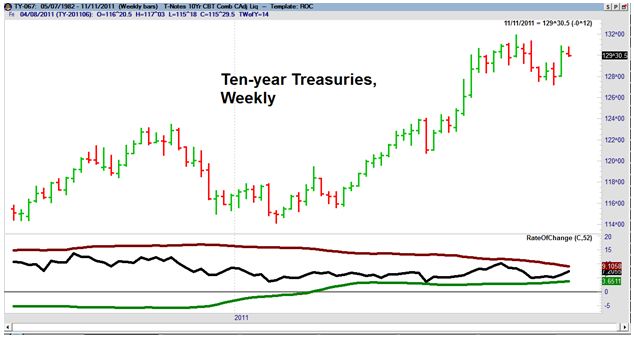 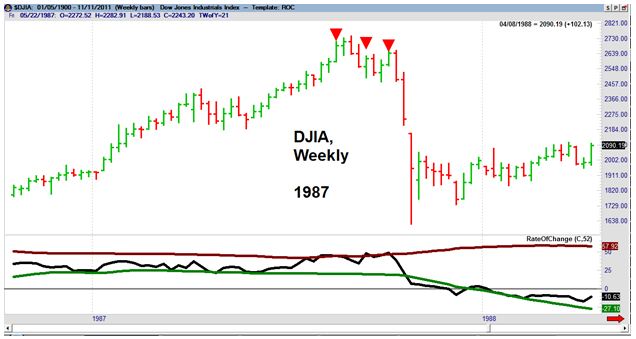 This idea is applicable to any market and adapts to the price action. It quantifies the concept of a bubble, a very real market phenomenon that has caused many to lose fortunes. Adding Bollinger Bands to the annual rate of change can spot market extremes and offer a timely sell signal. This helps prevent the opportunity cost of missing out on the large gains that come during a bubble and helps avoid the large losses that accrue quickly by failing to spot the trend reversal at the end of a bubble.

Next week, we will back test this idea across multiple markets and over several time frames. Examples will show that this strategy will not work 100 percent of the time, but it is a tool that can allow traders to express opinions on bubbles. Combined with a simple moving average, traders will always have an opinion on the markets but by applying rules to this process, they are less likely to suffer losses by arguing with the market.