The Action & Reaction Lines concept was kept secret from the crowd for many years. If you browse through the technical analysis literature one can see that this topic was rarely treated. This well kept secret represents a real mystery. The first to mention this concept was Roger W. Babson and then later Dr Alan H. Andrews. Both of them practised this set-up with huge success, making profits of millions of dollars. The efficiency of this mechanism is based on Newtonian principles.

“Truth is ever to be found in simplicity, and not in the multiplicity and confusion of  things”.

He synthesized the works of Descartes, Kepler, Copernicus and Galileo, writing several books. His genius marked not only the 17th century but also the future of mankind.

In his works, he mentioned:

“Geometry is founded in mechanical practice, and is nothing but a part of the universal mechanics … the description of right lines and circles, upon which geometry is founded, belongs to mechanics. Geometry doesn’t teach us (how) to draw these lines, but requires them to be drawn”.

He mainly considered the topics related to gravity, elastic force, levity, the resistance of fluids and the like attractive or impulsive forces.

Writings in his main book Principia (1687) cover the three laws of motion. He elaborated his principles through the use of nothing except his intelligence and the power of his analysis. Newton’s 3rd Law (Action and Reaction Principle) states:

“ For every Action there is an equal and opposite Reaction”

A brief explanations of Action & Reaction Principle is given below:

Having two bodies A and B, when the former exercises an action on the latter body (B) with an Action FAB force – then the body B exercises on A an equal and an opposite directed FBA forcecalled Reaction.

We illustrate this principle in Figure 184:

(the arrows signify the vectorial character of each force, defined by: magnitude and
direction); these two forces are equal in magnitude but opposite in direction

This principle stood the test of time and more than 300 years later, the resulting structure – classical mechanics – has its ubiquitous use in financial markets, business, and our everyday life.

We know by now that Action& Reaction Lines represent vectorial forces. The dictionary defines the word vector as

We know from our high school days that every force carries a certain degree of energy. What better carrying guide for this kinetic energy, could be there, than the channelling structure ensured by the Action & Reaction Lines?

They carry the market flow energy, through the time-price ethereal space, showing us where the market could modify its kinetic energy status through :

We have deliberately chosen this type of A&R Criss-cross Pattern Technique, sort of market mapping, through the dispersion mechanism of Action & Reaction Lines, around the Center Line, in order to study its influential inclination on the outcome of the entry and on the potential results of the whole trade.

Its finality depends on the varying degree of the kinetic energy carried across the market flow by these three sets of trend lines, throughout the selected 60-min time frame charts (refer to Figure 2).

The selection of their trajectory, including the choice of the pivots, becomes primordial in our quest for the low-risk high-probability trades. 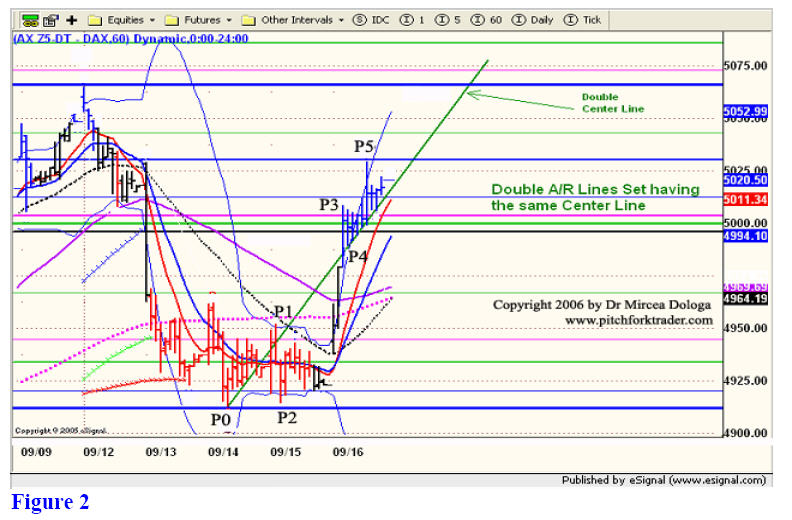 As we can observe on the above chart, the P0 to P5 pivots have been selected and labelled. The numerously tested (eight times) Center Line has beendrawn. Our goal, for this case, is to study the double A&R Lines set-ups construction, having the same Center Line, in view of a reversal. 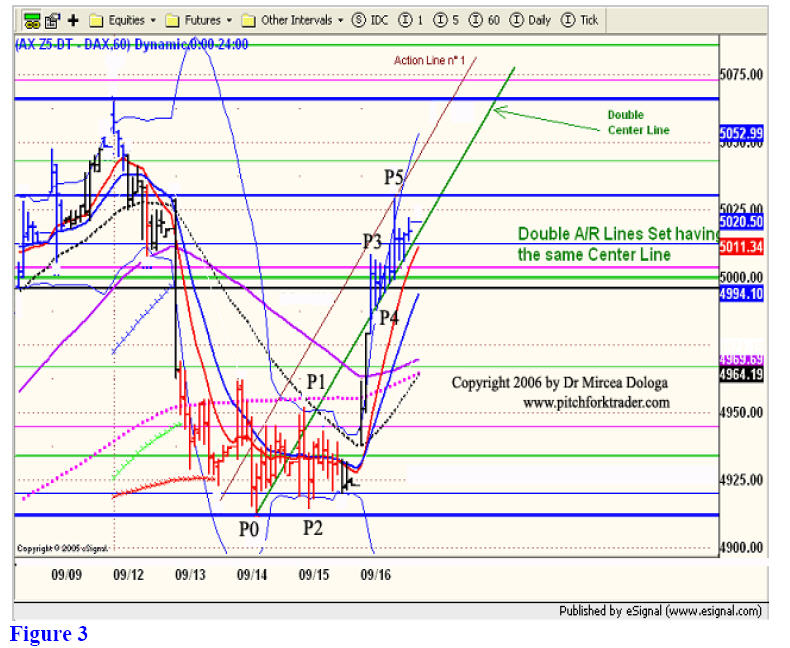 The Action Line n° 1 is constructed by drawing a parallel trend line to the Center Line, through the P5 pivot. 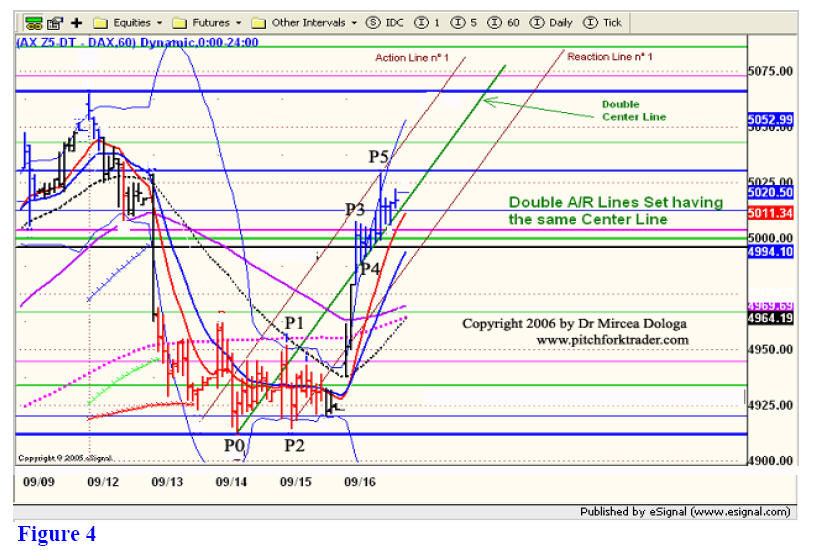 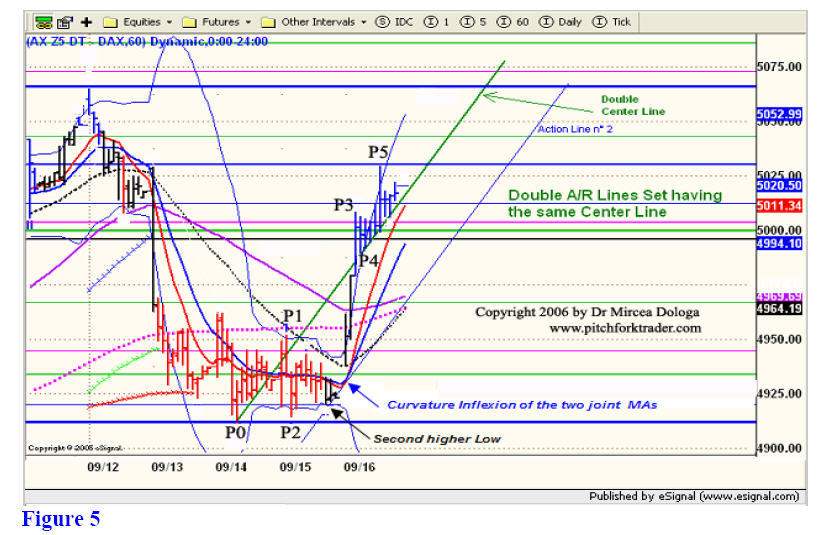 For the study of the A&R Lines set-up n° 2, in the above chart, we have chosen the same numerously tested (8 times) Center Line. The Action Line n° 2, was constructed by drawing the tangent to the curvature inflexion of the two intersected/joint moving averages, a lower parallel trend line to the Center Line, through the Cartesian coordinates of the second higher low, where P0 pivot was the lowest low (reversal point) and the P2 pivot, the first higher low. 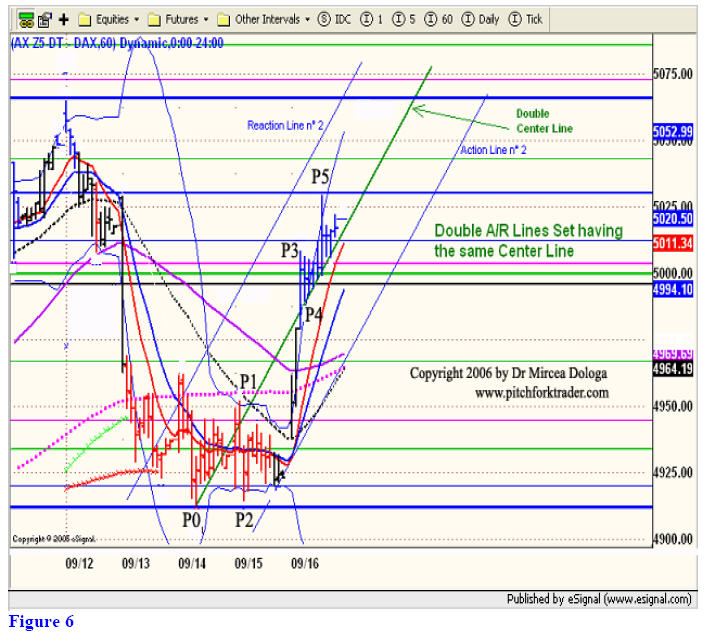 These two set of lines do not form a symmetry in regard to the Center Line; each side contains an Action and a Reaction Line from a different A&R Lines set-up.

We have deliberately chosen this type of A&R Criss-cross Pattern Technique, sort of market mapping, in order to study its influential velleity on the outcome of entry and the potential results of the whole trade. 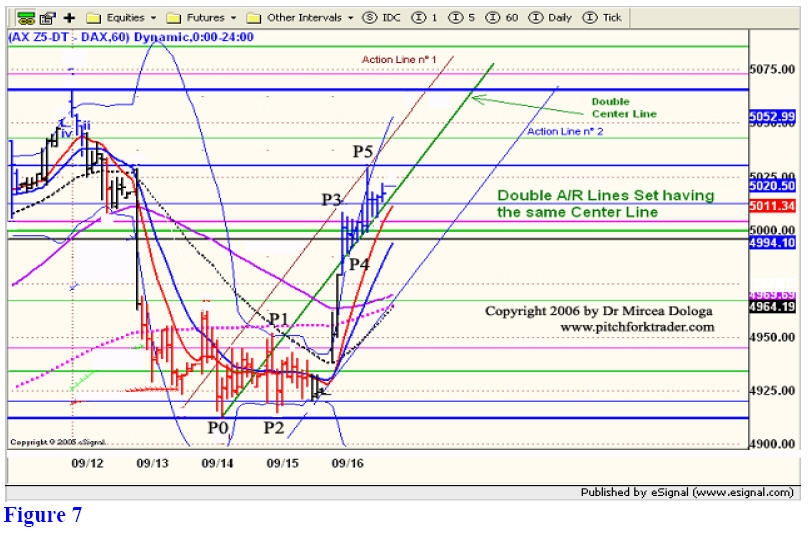 In order to enhance the comprehension of this A&R Criss-cross Pattern Technique, we have purposely drawn the dual combination of the two different Action Lines, each on a different side of the Center Line. Thus, we have created a better description of the current market flow, which freely travels upward through the channel formed by the Center Line and the Action Line n° 1. The marketrested for 3 bars time duration, and is now ready to proceed either upward, having the Action Line n° 1 as an objective target, or on the contrary, downward, dropping like a stone in abyssal waters. The latter movement will take the Action Line n° 2, as its primary objective target. The numerous tests (eight times) of the Center Line denoted a strong supportpleading for the up-trend continuation, but the steep slope of the two moving averages and the P0 to P5 labelling both announced a vigorous market reversal. 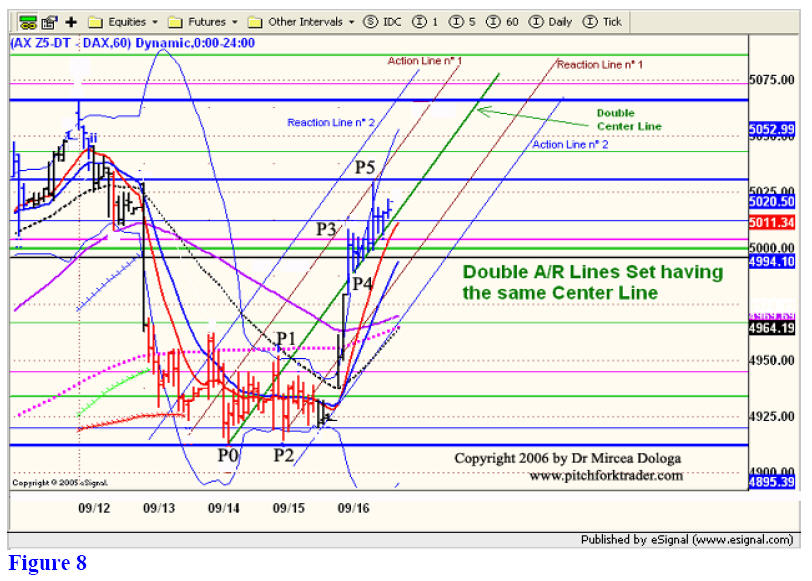 Our two set-ups are now complete and we are ready for the market to make its next move. What will it be: a trend continuation or an abyssal drop? 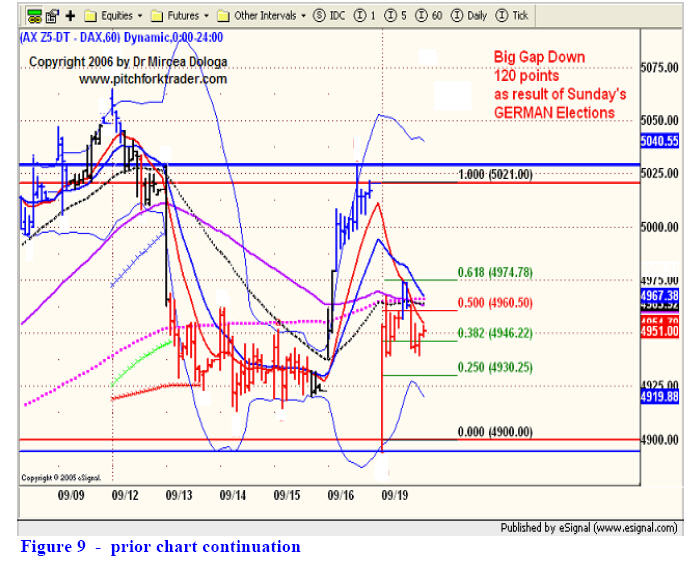 As we partially expected (see above chart) the market dropped twice its usual daily Average True Range (120 points worth about $3600), into the abyss, due to the political and economic instability provoked by the results of Sunday’s German election (09/18/05).
This study will cultivate our taste for expecting the unexpected, especially by paying much more attention to the pre-open preparation of our incoming German Dax Index trading day, such as the status of fundamentals:

Think also of the unpredictable human-created events, so frequent in our modern times: exacerbation of the ongoing wars (like in nowadays Iraq), terrorism acts, natural catastrophes and of course the results of the ongoing elections.
Going back, on the above chart (Figure 9), we deliberately exposed it without the two A&R Lines set-ups.
Even if it is obvious that the market drop is significant, it is not so obvious, how a trader should have behaved

The well experienced, astute trader would have been getting the most out of this specific, somewhat tailor made situation created by the unexpected, yielding well above average profits for the trader. 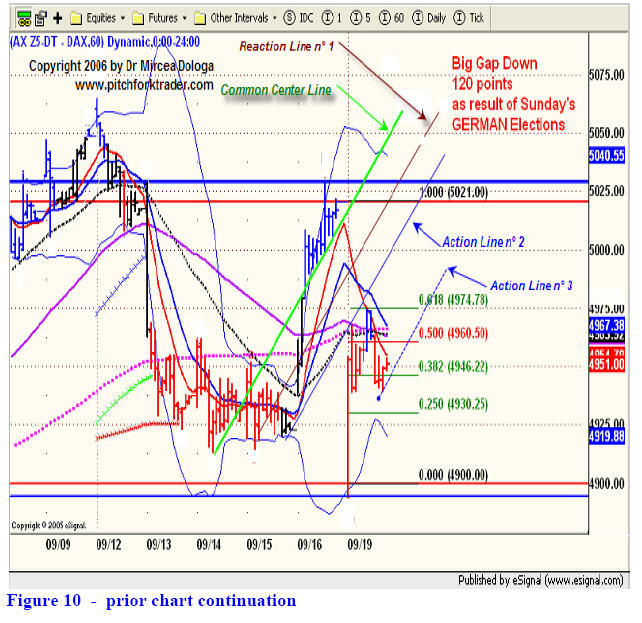 The above chart is identical with the previous one, but has the most of the indispensable trend lines already drawn. We can more clearly observe the market flow’s behaviour, and adopt the trader’s attitude in an optimal manner. In spite of the huge down gap, the opening 60 minutes bar retraced more than 38.2%, but less than 50%.

The second opening bar climbed, all the way up, to the Action Reaction Line n° 2, creating an almost 55% retracement. With these high-steamed movements done, the market flow entered a sideways phase, varying between the 30% and the 62% retracement. This rectangle is formed, and the last low leaned against the newly constructed Action Line n° 3.

We were earlier talking about ”getting the most out of this specific, somewhat tailor made situation created by the unexpected, yielding well above average profits for the trader ”. The astute trader would have thoroughly analysed this complex trading situation, in a evolutionary manner, with several timing related aspects in mind:

In this way, we could have gathered some veridical information and got a rather full comprehension of the imminent market drop situation, well ahead the market opening. 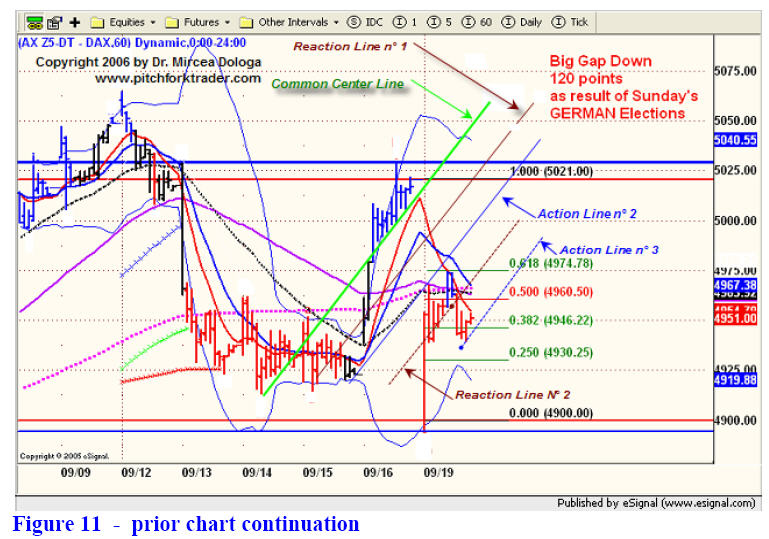 The above chart differs from the chart of the Figure 10 by just the presence of the Reaction Line n° 2. It is very useful for the trader to get familiar with how well the market flow movements are regulated by the latter line which serves as an authentic symmetry axis, in spite of the dramatic and anguishing huge gap’s movements.

Conclusion
The Action& Reaction Lines is one of the best tools that brings risk control to the trader, which is the name of the game. The same principle that applies in any entrepreneurial life. This risk dominance will be always present because of the nature of trader’s professional life. He knows that of all businesses, trading is the only one that imposes losses, better said it’s a way of trader’s life. The risk management is the only trading element having the power of “to be or not to be” …as the saying goes “ you make money, if you don’t lose money”, otherwise said “how to build consistency.”

Dr Mircea Dologa is a commodity trading advisor (CTA) who founded a new teaching concept, for young and experienced traders at www.pitchforktrader.com He can be contacted, for any questions at : mircdologa@yahoo.com